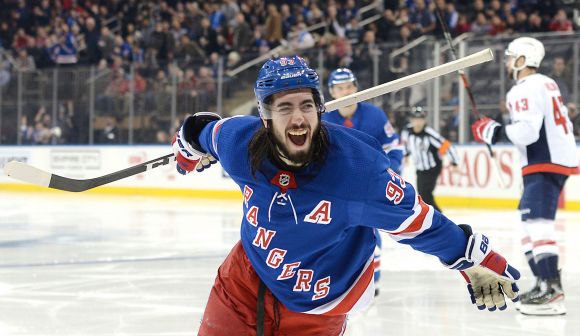 If a family immigrates to Sweden, no matter what their culture, their kids are gonna get serious exposure to the country's most popular team sports.

What with his raw skills being refined by the Tre Kronor system -- Three Crowns is the nation's symbol -- dude earned a reputation as a reliable sniper.

Zibanejad was at his sharpshooting best in a key game against the Washington Capitals. As it turned out, that's when New York really needed something historic to grab two vital points to keep them within hailing distance of a Wild Card slot.

Dude delivered, becoming only the third Ranger in their long existence to zing five of his eight shots into netting with his final goal being the gamer in overtime to post a 6-5 victory:

Trivia buffs will note Zibanejad joins Sergei Federov as the only players to pop their fifth goal of a game in overtime.

His came compliments of another Russian, Artemi Panarin, who's partnered with Zibanejad to morph this season from a rebuilding stage into a run at the playoffs.

Ironically, though, they only partner on power plays and overtime shifts. Coach David Quinn thinks it's more difficult for opponents to lock in on them when they're on different lines. So far, the Rangers can't complain.

So much so that the team threw an impromptu surprise locker room mosh for him afterward.

As Zibanejad's their leading goal scorer, even after poaching five in one game, that was probably the only surprise they had all night.