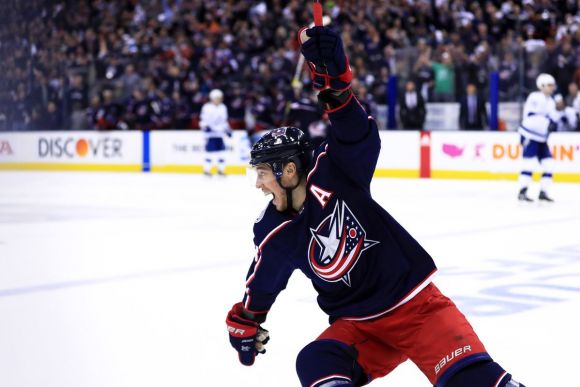 Hockey history just got a double-down in Columbus:

Suffice to say the excitement in Ohio's capital could hardly be contained.

Back along the Florida Gulf Coast, 'Ning management noted the occasion in uniquely candid terms:

We don’t have any words and we know you don’t want to hear them.

We understand your anger, your frustration, your sadness. Everything you’re feeling – we get it.

This isn’t the ending we imagined, and certainly not the one we wanted. Thank you for being there the entire way.

Not only did Jax coach John Tortorella's Old School tough love blister paint off locker room walls, he got his crew to accept it and go 1-2-2 trap against the NHL's star-studded, highest scoring team.

Dudes provided the experience and depth Columbus needed to keep up with a juggernaut like the Lightning.

Not that the Blue Jackets had much time to implement a special strategy. They only wrapped up the East's final playoff spot in Game 81, a far cry from Tampa Bay's cruise to the finish line, intent on tying the NHL's record of 62 wins in a season.

Still, Tortorella had the team whipped into shape around mid-February, so it was in the cards they were gonna be a tough out come springtime.

And they were. Twice in Tampa Bay and in Game 3 before a delerious crowd.

The 'Ning's big guns came to life in Game 4, but it was too little too late.

Even when they did something to breathe life into their cause, they immediate did or got forced into something disastrous. The game was over at 5-3, but with nothing to lose, coach Jon Cooper kept playing with an empty net.

The Jackets filled it, to the tune of a 7-3 result and the four-game sweep:

This wasn't exactly like a UMBC stunner, but a first-round sweep against the NHL's most dominant club that had never dropped three in a row during the regular season is beyond amazing.

Cooper now has an off-season to prevent his charges from overreacting.

And Columbus has to hope the Boston-Toronto series goes the distance. Their task is to recharge.