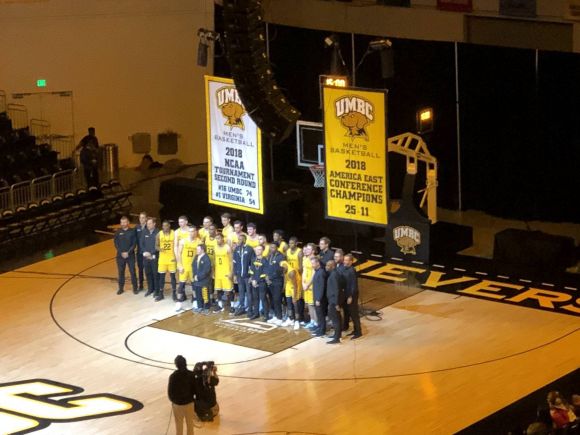 The brand spanking new college basketball season is finally upon us.

This is exciting news, particularly for the University of Maryland - Baltimore County.

For those dear readers who appreciate brevity, it's simply UMBC.

If you recall, those feisty 16th-seeded Retrievers took down the top seeded Virginia Cavaliers this past March, somehow causing the Madness to become even madder.

They didn't exactly squeak by, either.

The 74-54 beating was emphatic, even getting a rise out of Jim Nantz, who probably wanted to present game-worn neckties to the entire team.

Obviously, the Retrievers are hoping to begin their very own tradition unlike any other, as they recently raised a banner to honor this impossible upset:

As you can see, there were two banners, the other acknowledging the Retrievers' American East Conference Championship, which of course is what provided them access to the NCAA tourney in the first place.

Regardless of what UMBC does from here to the end of time, this story will remain forever cool.

That is, unless you're in any way affiliated with the University of Virginia basketball program.

The preseason No 5 Cavs have reportedly been working feverishly on a game plan designed around not losing by 20 points in the first round of the NCAA tourney against a vastly inferior opponent.

Damn, they even busted Hitler's bracket.