Published on 9-Jan-2020 by Alan Adamsson 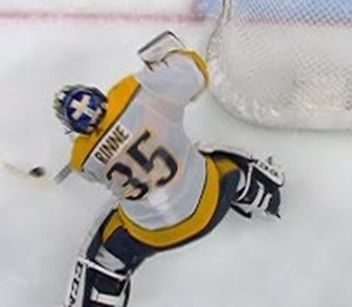 The National Hockey League's been around since 1917.

Believe it or not, it never saw one of its team's goalies light the lamp until 1979 when the New York Islanders' Billy Smith was the last Isle to touch the puck before Colorado Rockies defenseman Rob Ramage made a blind pass to an empty point.

And it just kept on going.

Since then, nine other goalies have rung one up, with five of them taking dead aim and going for it.

We now have a tenth.

Better yet, count Pekka Rinne as one of the netminders who went for it:

Damn straight they needed to do that.

The Predators had been so stuck in El Sucko Grande that it cost Peter Laviolette -- who'd taken them to the Stanley Cup finals in 2017 -- his job. This was new coach John Hynes' first game back on the carousel, and Rinne was instrumental in making it successful.

Dude stopped 29 of 31 shots in Nasville's 5-2 victory over the Blackhawks:

Nashville's currently on the outside looking in as far as the playoff race is concerned. Dudes are four points behind Winnipeg but do have a pair of games in hand.

Now that they've added to their long-range offense -- a true 5-on-5, if you will -- they oughta make up the difference in a hurry.