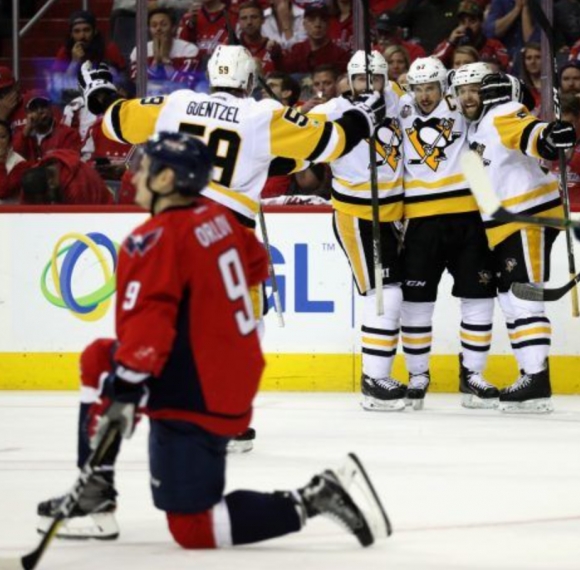 Well, for the Pittsburgh Penguins, it's quite simple. They'll just do what they seemingly always do and face another opponent on an inevitable march to the Stanley Cup Finals.

It's not that easy to summarize for Washington's snakebit Capitals.

Except for the part that they'll have plenty of time to polish that Presidents Trophy. Again.

Soccer has this meaningful season thing figured out. They simply crown the league titlist as just that at the end of a grueling season that rewards long-term achievement. To do so, they put their Cup runs inside the season as separate competition.

Blame baseball for introducing a post-season model. That was in 1903, when the upstart American League finally got an agreement from the staid National League to see who was the best of the best.

But mostly, blame the NHL for acquiring the rights to the challenge for Lord Stanley's Cup in 1926 and tacking it on to the end of their season.

If anything embedded the multi-team playoff template in North American sports, that was it.

And if any recent franchise has come to rue the day, it's the Caps:

There they were last night, having battled back from a 3-1 series deficit to earn the only thing a regular-season championship provides: a deciding game at home.

So much for that.

But Pittsburgh topped that, too. After all, they lost their starting goalie and top defenseman before the playoffs even began, for chrissakes!

How many teams can call on a backup like Marc-André Fleury, former Pens starter and still spectacular when needed?

Sidney Crosby was lost for a game, of course, and had his moments with physical danger in others.

Speedy Carl Hagelin was out for the decider, too, as part of Pittsburgh's ongoing battle with health. Neither team has cited injuries for its fortunes, or lack thereof. That's just hockey, and the Penguins were simply deeper.

In the end, not even Justin Williams -- Mr Game 7 -- could rise to the occasion and saw his crown passed to Bryan Rust.

So, what is next for the Capitals? Do they now blow it up? That'd cost a good many regular-season sellouts.

However, that decision may not be entirely up to them.

Ovechkin's an eternal gamer, but his window's closing; he could be joining Henrik Lundqvist as two of hockey's biggest names whose Cup-hoisting chances have passed.

How many Chicago Cubs wound up wondering that before last fall?

The way it's going in the nation's capital, Ovechkin had best have a Jágr-length career.