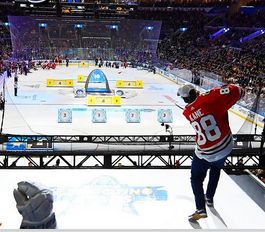 For some time, in most sports' All-Star weekends, it's the sideshow that's taken center stage.

Now, in the NHL's skills extravaganza, it's got a sideshow of its own, and the players seemed to like it.

One of the festivities featured the Shooting Stars competition, where players stood on a platform 30 feet above the ice and tried their luck at what amounted to a new form of shuffleboard.

Not sure that was a reason when the league's producers had a few of the players test it out to see if they liked it, but most of them did.

And that's how the skills competition wound up with its first event that isn't directly related to action fans would see on the ice in a normal game.

Among other things, we learned why there's only one Gateway Arch in St Louis and not a clone built behind it.

Apparently, nary a bright light on the production team considered that shooters might drop a puck in over the arch and still hit the 10-point target.

As it was, Chicago's Patrick Kane claimed the distinction of being this event's first-ever winner, a feat he'll surely pass along to his kids and grandkids some day.

They'll likely be much more impressed with this than the three shiny Stanley Cups that wouldn't be half as much fun to play with.

As far as the usual skills went -- the ones players actually spend their careers training for -- here were the winners:

It was also cool for the weekend to give the women's game their due.

As an aside, the Justin Bieber mask was a Tomas Hertl troll job that alluded to a bet Binnington made with the singer.

That's what they all say.