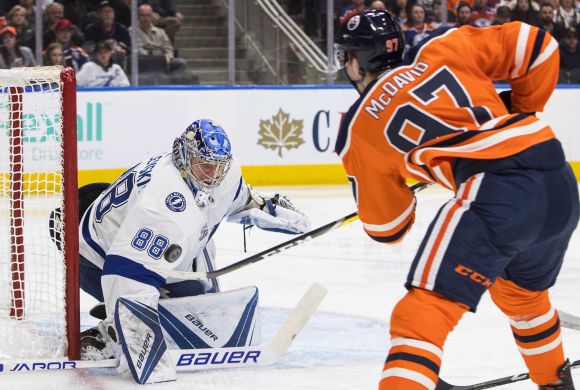 Back in the days of run-&-gun hockey, the Edmonton Oilers were the masters of steel and ice.

As Glen Sather sorta mused, that team could even make stars outta dudes like BJ McDonald who skated on Wayne Gretzky's wing:

A fire hyrdrant could score 50 goals on that line.

However, McDonald did spend the rest of his career proving Sather right.

Connor McDavid is obviously no fire hydrant. Dude's a blur on the ice ...

McDavid's been a human highlight reel damn near every time he hits the ice this season, starting with a hat trick on Opening Night that left analysts in awe:

It was bound to happen that he'd put together a game that went beyond a hatter and shift into McJesus mode.

It just happened against Tampa Bay, which currently has the league's best record:

Hard to tell from that display that the Oil's sitting sixth in the Pacific Division and 11 points adrift from a playoff position.

Edmonton's got 31 games to figure it out. Frankly, even with McDavid logging max ice time, that's a tall order.

This is the squad that had four consecutive first overall draft choices -- only McDavid and Ryan Nugent-Hopkins remain -- and made the playoffs only last season after ten years of early tee times. That was supposed to be the start of Edmonton's resurgence to a second era of glory.