Published on 2-Mar-2020 by Alan Adamsson 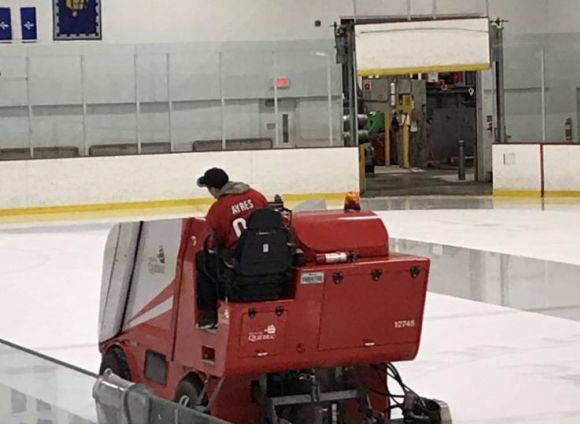 If any pro sport manages to keep a bit of an edge while still having fun, it's the NHL.

Who else would ever have a rule where an everyman might live out his fantasy in the real world?

Among other things -- besides not having to pay an extra NHL-grade salary -- that's why the Board of Governors found the Emergency Backup Goalie rule (EBUG) to be a practical solution to an occasional problem.

The latest such Walter Mitty moment came in spectacular fashion when both Carolina Hurricane goalies were knocked outta action in Toronto. Enter erstwhile Zamboni driver David Ayres, who saved the few shots -- eight straight after the first two found nylon -- a stepped-up 'Cane defense allowed to do his bit for a Carolina victory.

The afterglow was an extension of living the dream:

Then it was on to a hero's welcome in Raleigh, where the governor of North Carolina declared it David Ayres Day:

A sampling from the first two days of the Dave Ayres Media Tour. pic.twitter.com/sLrlUrOrzY

After that, the 'Canes promptly put him to work:

How much fun is that? Not to warm-&-fuzzy PR for the league.

So why would the Board of Governors even consider getting all stuffy-&-formal by proposing a third goaltender be rostered because amateurs between the pipes could be considered a mockery to the game?

But damned if the OGs didn't discuss it at their March meetings.

Emergency Backup Goalie policy will continue as it is now, which is a result of a similar incident in 2015. The Guvs came up with a spiffy solution then, and it only looks better now.

Rule 5.3 explains how Dwayne Roloson would be permitted to play for ANA should he be needed as emergency 3rd goalie. pic.twitter.com/WJPRUMHPuH

Fortunately, not the NHL's Board of Governors.