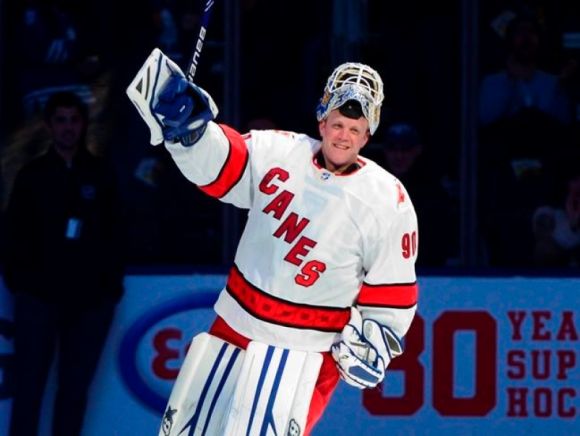 There are camps here and there that satisfy the dreams of dudes who've fantasized about driving a Zamboni.

However, there are no camps for actual Zamboni drives who've fantasized about suiting up and getting between the pipes in an actual NHL game.

Those just kinda happen once a century or so.

So when fate picked 42-year-old David Ayres outta the center of the known hockey universe to be that dude, he made the most of it.

Coming in cold after Carolina's rostered goalies --  James Reimer and Petr Mrazek --  left all but out cold was probably a shock to Ayres' system. It showed when the first two shots he faced lit the lamp. After constant encouragement by the 'Canes, though, dude blanked the Maple Leafs on the final eight.

Not sure what's more impressive, Ayres' performance or Carolina's equipment manager customizing a sweater on the spot. That's some seriously spiffy stitching.

Still, weighing the degree of difficulty between the two ...

Ironically, the Leafs haven't exactly had trouble getting quality shots on goal this season. Their issue's been on the other side of the ice. However, the Hurricanes went to great lengths to take as much pressure off Ayres as they could, and did quite the job of it.

Their efforts didn't necessarily extend to Ayres' wife, though.

No one's gonna doubt she fits the description of a dedicated hockey wife, either:

I don’t celebrate Valentines Day. But I’m a sucker for a good poem. pic.twitter.com/oTSLLxEJ8N

Good luck to the Hockey Hall of Fame trying to wrest Sweater No 90 from the Ayres family's hands, too. Odds are strong that'll be an heirloom for generations to come.

They're definitely not getting the most valuable $500 check in hockey today:

Pay for David Ayres tonight: $500 and his game-worn #Canes jersey. Here's the contract he would have signed during the game. pic.twitter.com/hVbulQGzla

That oughta look good alongside his regular paycheck from the Maple Leafs organization for doing the ice cuts at the Coca-Cola Coliseum, home arena for the Toronto Marlies, their AHL affiliate.

Dude's also served as a Leafs practice goalie, but it's unlikely that had much of an effect on his eight saves. Credit there remains with Carolina's defense and backchecking.

Credit more than the team's equipment manager for quick action, too:

Dave will be getting royalties, but we are also working with him to identify a kidney foundation that will receive a portion of the proceeds https://t.co/RwSNg12DA4

Ayres had a kidney transplant back in 2005, after which he figured his hockey career has been shelved.

He was wrong. For one night, at least.

The 'Canes are in a fierce battle with Columbus and the Islanders for a Wild Card spot, so this victory secured a precious two points in the bigger and more immediate scheme of things.

For one particular Zamboni driver, though, who strapped on the Marlies' goalies' gear and who wore a Leafs T-shirt under it, this win was as good as raising the Stanley Cup.

I am the happiest, proudest woman on the planet because my human got to live out his ultimate dream.
...I’m also surprised I still have a voice. https://t.co/qTglhZypG5

In this case, maybe even better.