Published on 8-Jan-2020 by Alan Adamsson 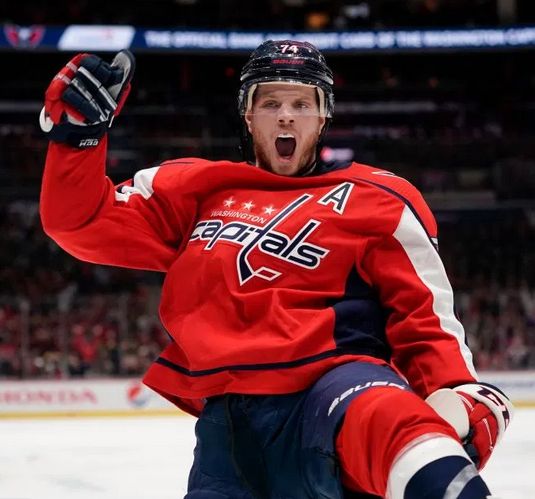 With few exceptions, defensemen aren't designed to be scoring leaders.

Two of them, though, were legendary: Incidentally, coming in at No 11 was that motorcycle ridin' blueline bomber, Al MacInnis, who's best-year tally tied Coffey at 28+75=90.

Dude coulda scored more goals but disdained empty-netters, slamming pucks into the boards instead when the occasions presented themselves. With a triple-digit heater, MacInnis kinda enjoyed doing that, anyway.

Slapshots in excess of 100mph is more common these days, and the current leader in the clubhouse would be the Washington Capitals' John Carlson.

That's based on his winning the hardest shot competition in last season's skills night during All-Star Weekend:

Safe to say, Carlson's got it all.

It's even safer to state dude's in the process of putting together of the best offensive seasons for a defenseman in NHL history, quietly notching two more assists in Washington's 6-1 win over Ottawa last night.

They were part of the Cap blueliners racking up a goal and five helpers on the evening:

Carlson now has 54 points -- 13 goals, 41 assists -- on the season, which not only leads the Capitals in scoring but ranks 10th in the entire NHL, one point behind Sabres center Jack Eichel (55) and two points ahead of Maple Leafs center Auston Matthews (52).

Alex Ovechkin foretold what sorta campaign this was gonna be for Carlson 'way back at the season's start and went on record with it:

So far, dude's living up to the hype.

As part of Washington's relentless scoring juggernaut, there's also no end in sight.

It is if the Caps wanna pick up their second Cup.

Seems like they've finally recovered from winning their first one.

It may come in handy again this June.