Angry White Dude: It's All for the Best 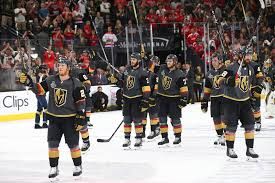 Now that the dust has settled in the hockey season, it's time to take stock of what we just witnessed.

The Washington Capitals, of course, knocked off the Vegas Golden Knights in five games to win their first-ever Stanley Cup.

Dudes then capped an relentless season with an epic marathon celebration -- and for all we know, it's still going -- both of which confirmed the human body's incredible durability.

Congrats to the Capitals! And what a season for the expansion Knights!

A first-year team making it to the Stanley Cup finals? Unheard of, for sure.

Losing in the finals is certainly a downer for the team and fans, but trust me, it's all for the best.

When you win it all in your first year, there's only one place to go.

Tubby Smith took over for Rick Pitino at the University of Kentucky. The Wildcats were at the top of the basketball world at the time, having won a national title in 1996 and, according to many, missing a second straight title in 1997 by the torn ACL of shooting guard Derek Anderson.

Dude ripped his ACL in January against SEC foe Auburn; Kentucky then lost the 1997 title game in overtime to the Arizona Wildcats.

The team Smith inherited sported seven players from the Arizona loss and five from the 1996 championship team. However, since most of the players who had left after the 1996 and 1997 seasons were high NBA draft picks, his team had the lowest pre-season ranking since Kentucky came off probation in 1991.

In his first season at UK, Smith coached the Wildcats to their seventh NCAA championship, including:

What a way to start!

No one's saying Smith wasn't a good coach. Trouble was, when he had to recruit his own players, deal with the press, and do all that being a Kentucky head coach with a title to defend and another one expected, it was easy to see dude was not the coach everyone thought he was.

Great man. Average coach by Wildcat standards. Besides winning that title, the best thing he ever did for UK basketball was quit and go to Minnasota.

Thanks for falling on your sword, dude. Big Blue Nation honors you for doing the right thing.

Point, is Smith could never live up to expectations after that first season.

The Knghts can now suffer a bit before they raise their first banner. Fans, coaches, and players have that taste in their mouths. So very close.

There's plenty of time for them to get that first title.

Losing to the Caps in the finals hurts right now, but in the long run, it was the very best thing for the team and the league.

Enjoy the offseason, dudes. You deserve it.

And remember what all of us Cleveland Browns fans always say:

Wait 'til next year!