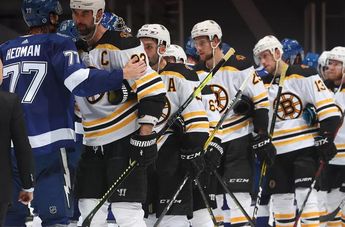 Everywhere but in North America of course.

They've been going since dinosaurs walked the earth, and they've always had their major cup competitions woven into their season.

In this sector, baseball set the stage of a post-season in 1903 when the upstart American League challenged the established National League to a duel of champions after all had been done and dusted.

OK, it was a rocky start, but the idea caught on.

Then, in 1926, when the NHL assumed total control of the Stanley Cup challenge, it followed baseball's lead and stuck the tournament after its regular season, and a sporting tradition in the USA and Canada was solidified.

So while the likes of Liverpool and Bayern München receive the acclaim they so richly deserve for emerging at the top of their packs over the course of months, North American teams who do the same suffer a much more inglorious fate if they're not firing on all cylinders afterwards.

In that respect, the NHL's Presidents' Trophy has become a curse.

Over the most recent seven seasons, the club that holds the best record in the league has failed to make the Stanley Cup Final.

The team that kept the streak alive this year is Boston's Bruins.

Unfortunately for them, they ran into a Tampa Bay Lightning team on a mission.

That's the crew who won the Prez last season with a 62-16-4 record and then promptly got swept in the first round by the previously unassuming Columbus Blue Jackets. Ironically, the mastermind in that one was John Tortorella, who led the 'Ning to their only Stanley Cup championship back in 2004.

Despite last season's hiccup, they've been to the Eastern Conference finals four times in the past six seasons, including the one upcoming after their 3-2 double-overtime win de-bubbled the Bruins in five games:

Before this series, some thought it'd be the Stanley Cup final in all but actuality. Maybe it'll prove out to be that way, but as hard-fought as it was, Boston never showed they were in Tampa's league.

However, they're in the same conference and -- Presidents' Trophy or no -- the better team won.