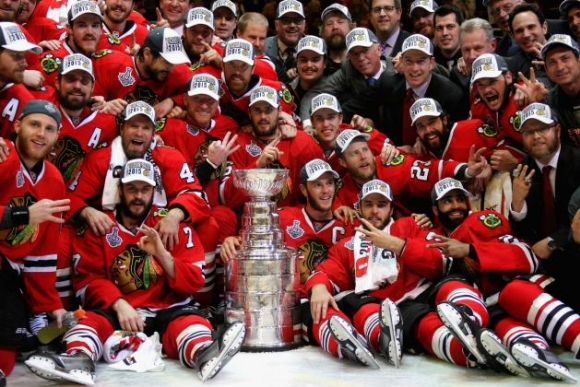 When it comes to awarding North America's oldest team trophy in Chicago, the Stanley Cup is fashionably late.

That was the only time prior to this season that it was due to make an appearance after the Blackhawks won it. However, the NHL's prez, Frank Calder, figured the heavily favored Toronto Maple Leafs -- who else? -- would prevail and shipped the hardware to the Great White North.

So, it was celebration time in the Windy City without the Cup. It would arrive a day later.

Fast forward to last night, when the latest edition of Blackhawks laced 'em up with Tampa Bay right about the time the Cup and its minders left their Chicago hotel. Coach Joel Quenneville's crew did what they came to do:

It was a hard-earned triumph, especially after running a rugged gauntlet where they saw off the likes of Nashville and Anaheim.

Seems like the trophy's journey to the coda was just as eventful. Lousy weather and lousier traffic led to a 106mph race to the Madhouse on Madison.

Fortunately, the team and fans were too busy celebrating to spend much time being picky about itineraries.

So was the rest of Chicago, which registered boffo ratings the likes of which had never before been seen for one hockey team in one broadcast market.

Three titles in six years will have that sort of effect.

Chicago knows how to treat a special occasion. The Blackhawks' victory parades in both 2010 and 2013 both featured estimated turnouts of 2million fans.

The Conn Smythe was a no-brainer. Not only did Duncan Keith come up trumps whenever the offense needed, his 715 total playoff minutes withstood everything from the Anaheim pounding to the vapor trails of Tampa's triplets.

As to the Lightning, it's now known that Ben Bishop was playing through a groin tear and Tyler Johnson had a broken wrist. Such is the adrenalin rush that is the Stanley Cup quest.

But they'll be back, as most of the Bolts will. The club has only one free agent on its roster, so it won't be a surprise to see them make a deep run next year.