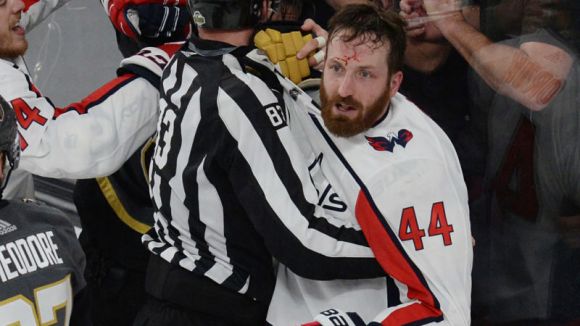 The Washington Capitals finally secured that elusive Stanley Cup title, and the celebration may continue indefinitely.

Their Finals throwdown with the expansion Golden Knights was quite entertaining, particularly for Caps enthusiasts.

However, it was also pretty gruesome as well.

It would appear Capitals defenseman Brooks Orpik actually lost a finger in Game 2 in Vegas.

How about we let dude explain it himself:

Orpik on his finger: “It kinda fell off.” Also, an unrelated hand injury he suffered in the Columbus series might require surgery. Hockey players, man. #ALLCAPS pic.twitter.com/HoxTlCNvDP

Yep, it kinda fell off.

Orpik definitely has them, and his apparently clank.

This minor inconvenience occured at the end of Game 2, caused by a vicious slash from Golden Knights center Eric Haula.

The severed left pinkie was simply reattached by the team doctor, and Orpik was back on the ice for Game 3.

It could've been worse, though.

That's not being re-attached, even with the aforementioned sturdiness.