Zeke Elliott Leaves His Bath Towel at Home on Thanksgiving 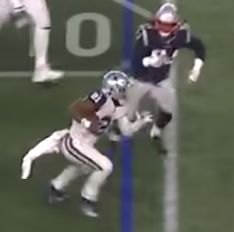 The Dallas Cowboys were victims of holiday malaise on Thanksgiving Day against the Buffalo Bills.

Of course, a more likely explanation is that the Bills are much better at football than the Cowboys.

Whatever the case, it didn't go well, although one wonders if they might've benefited from the presence of Zeke Elliott's giant bath towel.

Perhaps we should elaborate.

With the rainy conditions conspiring against them, Zeke decided to battle the elements with an assist from a conspicuously large towel:

Why is Ezekiel Elliott running with a full size Motel 6 bathroom towel tucked in his pants? pic.twitter.com/akag4XIvfB

This is a question that needs to be explored, if only to satisfy our own curiosity.

Obviously, a hand towel was probably necessary, but that thing was practically beach-sized.

Clearly, dude had his reasons.

One theory was that TCU head coach Gary Patterson was nearby sweating profusely, but he was probably somewhere in Texas recovering from that loss to Oklahoma:

It looks like it’s freezing in Norman yet Gary Patterson is sweating his ass off wearing a golf shirt on the sideline.

It simply doesn't add up.

Similar questions were being asked across the Interwebs:

Why is Ezekiel Elliott playing with a beach towel up his ass crack?

Not a big deal but pretty sure this towel on @EzekielElliott is a uniform violation. #LooksLikeFlagFootball pic.twitter.com/QNxzhBe9dL

We may never know the truth.