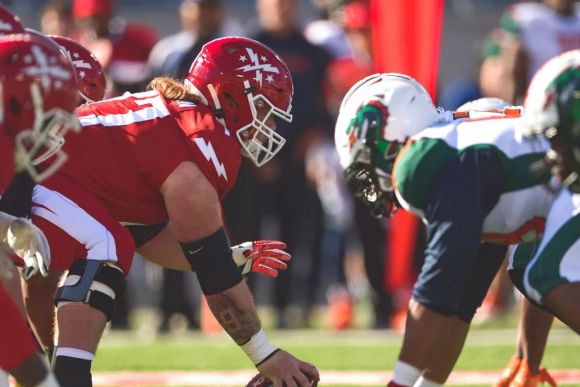 You had to see it to believe it.

By all accounts, a fair number of football fans did.

They went to or tuned into an XFL game, and it didn't break out into the sorta WWE event that played a major role in dooming the original version.

It was actually a normal game, except for the funky new rules and banishment of cheerleaders.

Even the DC Defenders' trick play was vanilla, known and performed from the pros to college to high school to Pop Warner to street ball.

Not a taser or any other gimmick in sight.

OK, there was Dillon Day's f-bomb thing making the airwaves, but at least one reference to the decadence of Western culture can surely be tolerated.

Besides, it slipped out so smoothly, who besides trigger-happy social media mavens would ever notice?

Other than that, DC's 31-19 defeat of Seattle's Dragons was what one would expect from a football game that's the only gridiron alternative this time of year, which is why it exists in the first place.

In other words, it was a whle lotta Football Lite, only less filling but still working on great taste:

What followed later in the day was another shade of, say, Wisconsin 45 Purdue 24 or Tampa Bay 35 Atlanta 22.

Fittingly, the Los Angeles Wildcats' 37-17 thrashing of Houston's Roughnecks would rank somewhere in between those two, which surely woulda been fine with the XFL brass.

It's just that with so few games and nothing else to switch over to except more established springtime sports.

Or maybe even a rapidly-growing Major League Rugby presence, which is definitely raising its quality of play.

The XFL needs a few more games in the books before drawing early conclusions, but so far, it appears its main value to the sporting calendar is to the sportsbooks. Football's got the easiest-to-play bets in North American sports, and it's clear by the first broadcasts the the league's own wager is on this fact.

That's where Dillon Day has a real point.