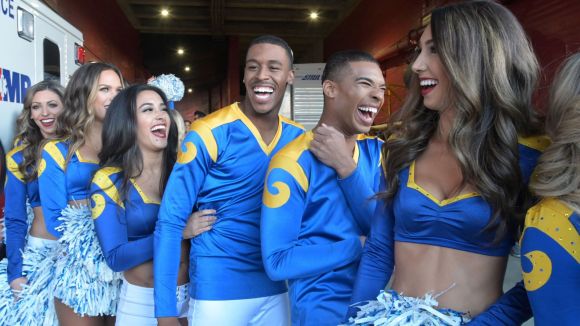 During the recent NBC Sunday Night Football battle between the Rams and Seahawks in Los Angeles, a group of dedicated social activists took to the field in protest.

Actually, it was just the Rams cheerleaders and mascot giddily losing track of time in the end zone after the two-minute warning during the first half.

We apologize for the error.

Indeed, these devoted leaders of cheer were just having too damn much fun, and the fact that the game was about to resume did little to damper their infectious enthusiasm:

“We need the cheerleaders off the field please.”

Unexpected delay between the Seahawks and Rams on Sunday Night Football as the Rams’ cheerleaders stayed on the field a little too long 😂@RamsNFL @RampageNFL #LARams pic.twitter.com/fr45qRYzSe

Sadly, their oblivious joy was rudely interrupted by that menacing announcement from the officials.

Al and Cris certainly enjoyed the scene, with Collingsworth proclaiming at the end of the clip that the marching band refused to yield.

The politically charged pop culture references aside, they did eventually leave the field, still smiling of course.

While we're quite sure that Rampage and the gender diverse Rams cheerleaders have definitive thoughts and passionate opinions on climate change, their protest lacked the cohesive message of the one staged at Harvard/Yale:

At halftime of Harvard-Yale a sit in protesting climate issues has broken out on the field, at least delaying the second half and the way the protest is growing I would be shocked if the game continues. pic.twitter.com/2BWCU2fLuI

Anyway, the wacky scene did at least produce this observation: