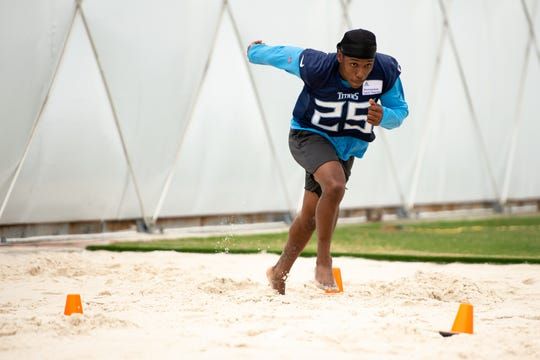 The NFL is widely regarded as a copycat league, and no organization has been cribbed as consistently and brazenly as the New England Patriots.

For example, the Tennessee Titans -- whose entire infrastructure seemingly consists of former Patriots -- have co-opted one of their more obscure concepts.

In an effort to augment their conditioning program and just have a blast at summer camp, the Titans have installed a sand pit at their training facility.

Former New Englander and current Tennessee GM Jon Robinson is all about the fun, and what better way to enjoy camp than frolicking on the beach.

Actually, this idea was conceived by Bill Belichick and not Jackie Treehorn, although the scantily clad women are more than welcomed.

The concept is relatively simple, as running and working out on a surface such as sand is much more amenable to the already overtaxed knees and ankles of NFL players.

As you can see, Rocky and Apollo are into it, perhaps a bit too much.

These wacky hijinks appear to be a trend recently, as even Vic Fangio, the oldest of old school head coaches, turned the last day of Broncos mini-camp into an adult amusement park.

And yes, that was John Elway in the dunk tank.

Maybe he was looking for a franchise QB in there.