The Cleveland Browns and the Infinite Sadness 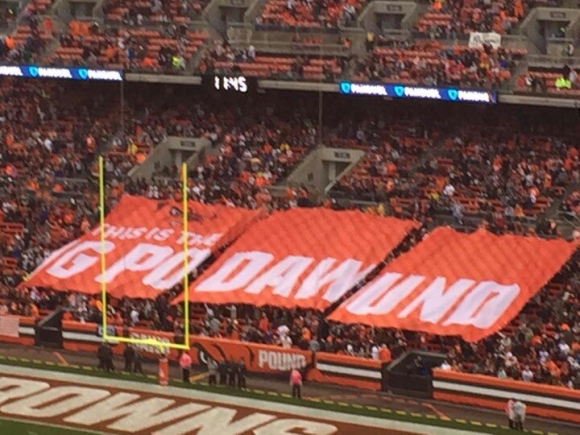 This remarkable franchise is quite simply a marvel of modern day professional sports.

The NFL goes to amazing lengths to ensure parity in its ranks, but a defiant Cleveland Browns club continues to resist.

This franchise has maintained a level of consistency that almost defies comprehension.

Just when you think they've bottomed out, the Brownies somehow manage to plumb the depths of futility even further.

The 2016 iteration of the Browns is winless after 10 games and has a very real chance of running the table of incompetence.

Our heroes just soiled themselves again Thursday night in Baltimore in perhaps the ugliest prime time NFL matchup in the history of Western civilization.

Remember how this collection of clowns lost to the Ravens last year in Cleveland?

Doomed head coach Hue Jackson had seemingly committed to young Cody Kessler at QB, because what possible difference does it make now? You're winless, so have a look at the kid.

Jackson inexplicably went to the fossilized Josh McCown after a Kessler-led three and out to open the second half, even though the youngster had played reasonably well.

Here's a tear-stained morsel to chew on.

Johnny Manziel is the last Cleveland starting QB to win a game.

The Browns appear to be rather fond of carousels -- both of the coaching and QB variety -- and as long as they keep spinning, this franchise will be forever stuck in neutral.

There's allegedly some semblance of a plan being formulated in the form of a complete reconstruction. Cleveland's allegedly stockpiling draft picks, but they still need to hit on a few of them occasionally. They also need to solve the endless QB dilemma.

This season's been so miserable, it's apparently afflicted their long-suffering fan base with some sort of learning disability.

Well, there's always the Cavs and the Indians, amirite?