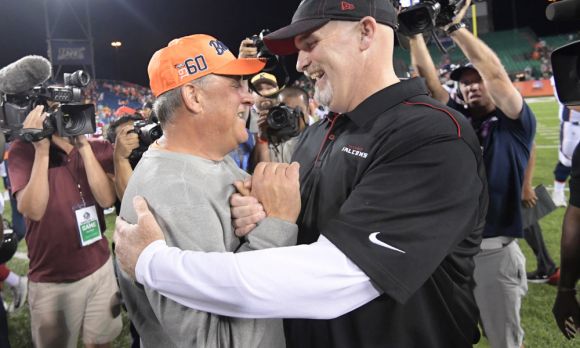 Of course, this was the first pre-season game of the 2019 NFL season, so the action on the field was fairly bleak.

However, a man named Vic Fangio was prowling the sidelines as the brand new Denver Broncos head coach.

We already feel like running directly through a wall, but there's so much more.

You see friends, the impossibly grizzled Fangio had spent a good portion of game day in a Cleveland hospital being treated for kidney stones.

Now this sounds like pure madness, but we assure you it's all been confirmed by those in the know.

The former Bears DC was simply not going to allow those pesky calcium deposits ruin his head coaching debut.

That was Vic arriving at the game, showing remarkably few signs of discomfort.

Despite what those two goons were prattling on about in the clip, it appears that Fangio has yet to pass the stones, describing them as moody.

And here was the 60-year-old holding court gingerly after his Broncos' 14-10 win over the Atlanta Falcons:

I could get used to this type of post game press conference from Vic Fangio pic.twitter.com/PyCSFTKo13

That tough SOB is laughing directly in the face of crippling agony, although we're still puzzled about the cheetah flip reference.

But our new favorite head coach gets a pass for being hand-forged by a master blacksmith.

We just hope that John Elway gave Vic some horse tranquilizer for the pain.