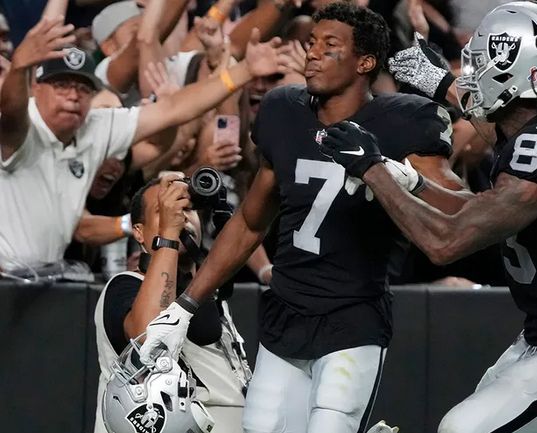 There are surely great minds somewhere on this planet making the answer to that conundrum their life's work, but none of them were in Las Vegas being thoroughly entertained by the Raiders and Baltimore Ravens.

As a result, odds are strong that 99.9% of them had much more in front of them than pondering what the hell déjà vu even is.

Well, that term does have a better ring to it than already seen.

In any language, the Ravens found out the hard way that something did change in an overtime where it appeared they lost, but they didn't, and then they well and truly did.

And to a team clad in black, no less.

The evening began in a good sorta negative fashion, as in Covid-19 negative. The Raiders were the NFL's first franchise to require fans be vaxxed and providing shots right then and there at the gate.

It certainly didn't put a damper on attendance for their first-ever home game with fans in the stands.

A stunning roller-coaster of a game -- @Raiders 33 and Baltimore Ravens 27 in OT. A wild one to write:https://t.co/MJIZeI0XNC pic.twitter.com/vVofkU8AB2

The Ravens entered their first game of the campaign having already lost four key players for the season right outta the gate. Still, for a good part of the game, it appeared like they were gonna weather the storm for Week 1, at least.

The Raiders, as opposed to last year, were much better at not being terrible. Maybe it's because no matter where they do team stuff in Las Vegas, everything's comfortably familiar to them:

Raiders owner Mark Davis’ home set to be constructed in Henderson to have a Silver & Black feel to it. Plans call for the 15,000 sqft home to include a 5,422 sqft garage. It’s listed valuation is $14 million.
More here: https://t.co/AqBUaJhPAo #vegas #raiders via @eli_segall pic.twitter.com/LMIb5nWahK

So, with all those warm-&-fuzzy Raider vibes around them, the team's defense couldn't help but pay homage to that Great Raider in the Sky and his legendary First Rule of Football Strategy:

It took a little longer than that, but dudes knocked Jackson around for three sacks and four fumbles, two of which were lost.

Which also explains why every one of Baltimore's leads in the game were lost, and the last of those was maddening:

This is what a visiting club can -- and usually does -- get for letting a home team hang around. Not that Las Vegas didn't pull a rabbit or two outta the proverbial hat to keep themselves close.

It quickly became clear they'd need a few. On the game's first series, Raider backup QB Marcus Mariota came in on a 3rd-&-1 to make a little magic himself:

The former Oregon Duck didn't look too good at the end of that play and wound up sitting the rest of the night out. Maybe this wasn't of the magnitude of Baltimore missing two starting defenders and their top two running backs, but it didn't help in a half where Carr was off his game.

Perhaps Marlon Humphrey should spend more focus on how a play finishes. A short field coulda been useful as far as the Ravens cashing in early, especially since it was eventually obvious they coulda used a few more points in the end:

Marlon Humphrey doesn't realize that he would have had an INT LOL pic.twitter.com/JnCLzpCTnt

Not sure about Humphrey, but Carr woke up in the second half, though, hitting floaters and threading needles, but he saved his best for that final drive and then the overtime.

Before the NFL forensics squad weighed in, it looked like he'd teamed up with Bryan Edwards in the OT to claim the win:

WHAT A PLAY BY BRYAN EDWARDS 😱

Dude was proven to be half a yard short of the promised land. While this put paid to a case of premature celebration, it even more pertinently introduced the most famous Yogi Berra saying into the fray:

It didn't take long for that turnover to beget another.

Jackson's propensity to haul the ball around like a loaf of bread -- especially in traffic -- cost him shortly thereafter. Recent newsmaker Carl Nassib was there when it counted:

That set up Carr to continue another famous Raider strategy: the ol' vertical stretch. This time, it ws Zay Jones on the receiving end:

With an injury situation that's already an issue, Baltimore can't afford to throw away games like this, and being real, if this is how the Raiders have to win games, it could be a long season for them, too.

But what the hell. Their house was vaxxed to the max, their fans went home happy, and they're undefeated.

It coulda been worse, and even Ravens fans had to admit it was entertaining.