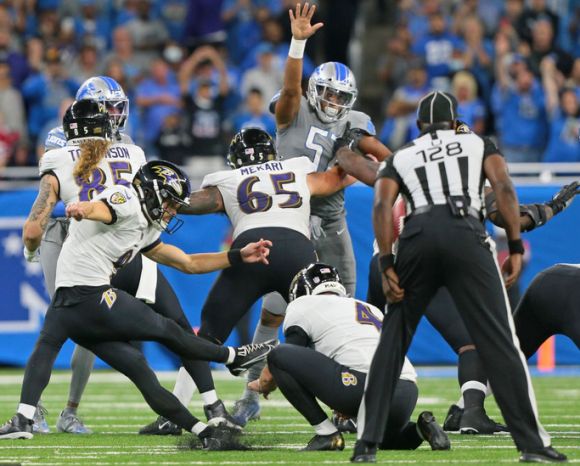 Back in 1970, as the New Orleans Saints were lining up for what would become a 63-yard game-winning field goal by Tom Dempsey, noted Detroit Lions defensive lineman Alex Karras commented on what he and his teammates were doing:

We were too busy laughing for 62 yards of it.

So the Detroit Lions have experience in what happened to them again, this time by Justin Tucker of the Baltimore Ravens and with a few extra yards -- pardon the expression -- to boot.

Of course it'd be against the Lions.

If any team in recent times was gonna be victimized by a game-winning field goal from North Korean missile range, it'd be them.

Not just because Tucker launched it from a new NFL-record 66 yards away, but because of how the situation came to be in the first place:

The Justin Tucker game-winning kick from 66 yards never should have happened. According to CBS broadcast graphic, this should have been a delay of game on Baltimore on the play before the field goal. #Lions #Ravens pic.twitter.com/YnVOuC3KXX

Then again, with the Lions' luck, chances are dude woulda knocked it in from 71 yards.

For that time and that place, though, 66 yards worked, albeit with a little help from a fortuitous doink:

In a fitting symbolism for what this extraordinary 19-17 loss portends to the rest of Detroit's season was a CBS Sports tweet that seemingly alluded to the infamous baptism-hitmen scene in The Godfather.

Gotta say, though, Tucker's got an impressive set of pipes when he's in opera mode:

And now, we present to you: Justin Tucker kicking a 66-yard field goal while Justin Tucker sings opera pic.twitter.com/LtTgGPpDiH

Tucker and the Ravens were surely unaware that down in the Jax, Arizona Cardinals kicker Matt Prater had already attempted to set the bar even higher.

However, the former Lion -- it's gotta be some kinda curse -- and his fellow special teamers discovered the hard way that there are risks involved:

One could call this as getting Auburned:

Since Jamal Agnew plays for the Jaguars and not the Tigers, his team did not win the football game.

Instead, they're right down in the cellar with the Lions, still winless in this still-young 2021 campaign.

Thanks to Pete Gogolak -- the original soccer-style kicker -- Tucker will receive only accolades for pushing the boundaries back by a few yards.

That's better than what the NFL did to Dempsey:

Thomas and possibly others are alleged to have cleared the crossbars from distances exceeding 70 yards, so it won't be a surprise when this record falls.

Just keep an eye out for the next time Detroit's in a close game with time running out.