How to Troll a Kicker at Halftime with Tahir Whitehead 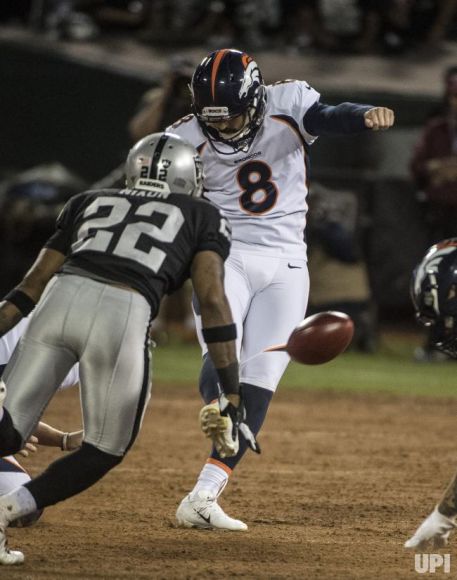 It seems that all the Oakland Raiders needed to play some good football was to remove the cancerous growth that is Antonio Brown.

Minus one diva, Chucky and the boys put it on the Denver Broncos at home on Monday Night Football.

In fact, dudes were feeling so uppity that one Raider decided to troll a kicker for no particular reason.

His name is Tahir Whitehead, and his game appears to be verbally abusing specialists.

With his Broncos down, 14-0, at the end of the first half, Brandon McManus was presented with the unenviable task of attempting a 64-yard field goal.

Actually, there was little to no pressure on the dude, considering the distance and the fact that a made kick would tie the NFL record.

And wouldn't you know it, McManus almost nailed the bastard, coming up just short:

Despite this superhuman effort, Whitehead was compelled to give him some shit:

Or maybe he was asking about that dynamite 'stache.

Brandon McManus didn't have the leg for that 64-yard FG attempt but he does have the stache pic.twitter.com/SNm3ZqT4Ls

Brandon McManus is a cop. pic.twitter.com/rznbtXbZvR

Or a guard at Litchfield Penitentiary.