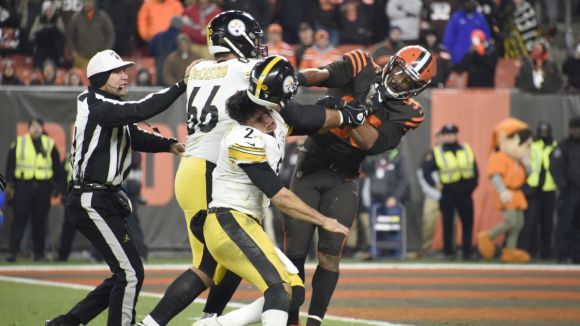 Myles Garrett  just really did it.

Millions of fans witnessed him lose his mind and, in some peoples thoughts, commit a criminal assault on Pittsburgh QB Mason Rudolph.

OK, nobody really knows just how long indefinitely is in Shield terms.  Right now, though, dude's done for the entire NFL season.

As Garrett did this on national TV, dude, his crew, and his legal team took the easiest way out that there is in 2019. They played the race card.

You can literally get away with murder if you just play the race card.

Garrett accuses Rudolph of using a racial slur, and that's what made him lose control on the field.

Really? That is what he came up with? That's the best he's got? We can all presume that Garrett accused Rudolph of using the dreaded n-word.

Not even any of his teammates could corroborate this concocted story.

Lets give Rudolph the benefit of the doubt.

The NFL jumped in, did an investigation, and found no evidence that dude used any racial slur at all.

Is that word used in NFL games? I'd practically bet the farm on it. I hear the word used almost every day at almost every level of sports that I officiate.

My comment is always the same to the players who are using it:

Hey! If I can't say it, then why should I allow you?

Back in my day, if you got into a fight, the go-to line was he was talking about my mamma! This is 2019, and I often wonder if kids talk about other kids' mamma, and if they do, is it OK to assault the person doing it?

Meaning anything you did after you heard that word is 100% justified and you should never be held responsible for your actions.

If it's such a bad word, I have a GREAT idea.

Why don't we all stop using it?

Why is it 100% acceptable for some people to use it every damn day while others are forbidden to use it and, if they ever have, they're stuck with a label for the rest of their lives?

Myles Garrett really went there and played that card. Glad the NFL kicked him out.