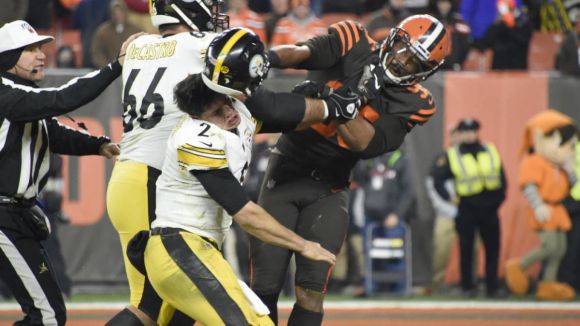 2017's top overall draft pick Myles Garrett will be the first to declare that what he did was outrageous and idiotic.

In fact, he already did.

Garrett joins the rest of the civilized world in knowing it's beyond unconscionable to rip the helmet off a dude who was in concussion protocol not all that long ago and then clubbing him with it.

Here's the full play. Myles Garrett hit Rudolph with his own helmet. Maurkice Pouncey (#53) threw punches and a kick. pic.twitter.com/kzJDd4Hj53

Make no mistake, Garrett's responsible for his own actions and deserves the reaction.

The underlying issue is he's in a league where players don't know how to fight.

Football's a padded up collision sport, not a contact sport like hockey. Those dudes know how to fight and, for the most part, know how to keep the matches fair.

More importantly, hockey players understand the fight's over as soon as one of the combatants hits the ice.

Save those kicks when a dude's down for back-alley fights.

The AFC North's a piece of work when trash talk and emotion turn into a Coke-&-Mentos cocktail. They talk like gunslingers, but they keep proving they have no idea what to do other than -- as hockey players say in those situations -- hit 'em with their purse.

Unfortunately for Rudolph, the purse in this case was hard plastic designed to be stronger than a cranium.

Garrett's ignorance in the ways of brawling has put him in infamous company with other players who were reputable dudes until they took leave of their senses, not to mention the reality of damage their impulsive actions could cause.

Every major North American pro sport has one.

Even hockey. Here's Dino Cicarelli of the old Minnesota North Stars back in 1988 literally assaulting Toronto's Luke Richardson to the point that charges were filed:

Ironically, Marichal was the batter. He'd hit two Dodgers by the time he came to the plate but knew Sandy Koufax didn't like retaliating. However, Roseboro did and buzzed Marichal's ears with tosses back to the mound.

Marichal finally snapped when he claimed one of those returns clipped him:

Roseboro needed all of that towel to stop the bleeding, and that just be the last time an umpire stepped in and lectured a player on what the hell were you doing?

Fortunately, Roseboro suffered no long-lasting effects. The same couldn't be said of former Houston Rockets star Rudy Tomjanovich after being on the business end of the most infamous punch in NBA history:

Now, no matter what amazing feats Garrett accomplishes for the rest of his career, odds are dude's gonna be defined by a weak-ass purse swing that landed on a smaller player.

Maybe some day, it'll take a sardonic place in the sports annals alongside stuff like Ty Cobb going into the stands and beating a hecker with the OG's own cane.

Some people are born that way. Others earn it.

A few, like Garrett, have to own it. All because he and most of his NFL brethren have no clue how to fight.