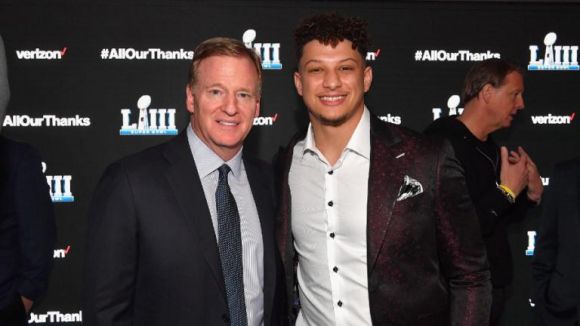 It's so reassuring to know that the Commissioner of North America's most powerful professional sport has confirmed his iron grasp of the obvious.

Without black players, there would be no National Football League ...

But wait! There's more! Roger Goodell actually followed up with something that'd damn near qualify him as a better-late-than-never Renaissance Man in what's also gotta be the globe's most conservative sport:

... and the protests around the country are emblematic of the centuries of silence, inequality and oppression of black players, coaches, fans and staff.

In fairness to Ward and June Cleaver, if social media happened back in the days of black-&-white and they saw the horror of an everyday dude slowly being choked to death over an 8min 46sec period, odds are they'd realize how relevant #BlackLivesMatter is to their world, too.

As it is, more whites today are starting to figure it out.

For years, no one's been better positioned to do so than Goodell, and it seems he's finally stepped out from behind his corporate fears and seen the light:

We, the NFL, condemn racism and the systematic oppression of Black People. We, the NFL, admit we were wrong for not listening to NFL players earlier and encourage all to speak out and peacefully protest. We, the NFL, believe Black Lives Matter. #InspireChange pic.twitter.com/ENWQP8A0sv

Time will tell if The Shield's actions will match Goodell's words and whether this really is about tolerance as opposed to PC PR.

Safe to say, as slow as dude's come to the party, there's still some serious convincing to do.

The players are stepping it up like it's 2017 all over again, too, and this time, they don't intend their message to be hijacked and/or repurposed:

Maybe Goodell can't compel team owners to give a player a shot at a roster spot, but he can damn well make certain that a company policy can be arranged so players will be able to express themselves without fear of retribution.

Yes, that could set a tricky precedent, but what isn't these days? Besides, for what was allowed, taking a knee during the national anthem in 2017 proved to be peaceful, even if the message turned out to be in the eye of the beholder.

The Commish didn't specifically apologize to any one person in his statement but said hed reach out to NFL players who've raised their voices.

About a lotta things.