Brees Gets Twitter-Sacked, Gets Back Up on One Knee 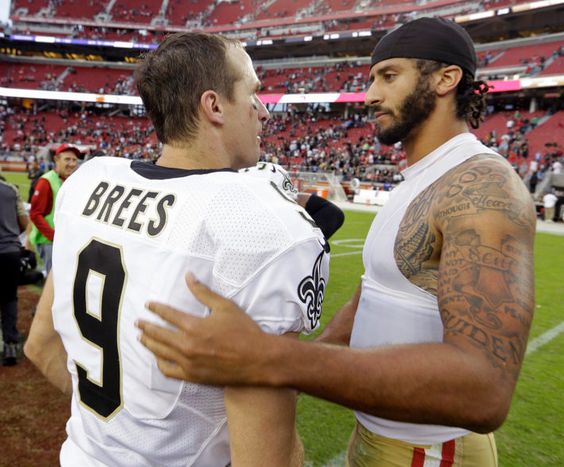 It's quite a view when one expands his reality to actually see the forest for the trees.

In the case of New Orleans Saints slinger Drew Brees, the agent of change was just that green, too.

With Colin Kaepernick returning to the fore as the nation awakens once again to his call for action back in 2016 vis à vis the shallowness of the Commish's fob-off remorse tweet, Drees was among the NFL stars sought out by media for a comment, and he dutifully toed The Shield's default company line:

Highlight: @readdanwrite asks @drewbrees what the star NFL quarterback thinks about "players kneeling again when the NFL season starts."@drewbrees: “I will never agree with anybody disrespecting the flag of the United States of America or our country.”

Dude didn't realize at the time that this sorta response was so yesterday.

In an effort to bring him into what could hopefully be the new normal, a few of his buds from Green Bay suggested it was time to really stand up and be counted:

It's time for change. pic.twitter.com/AS7wP9qz2x

And then Aaron Rodgers put an exclamation point on the humanity at stake, here:

So much so that dude made an abrupt about-face in order to see the light: This didn't sit well with the Twit-in-Chief, but give him props for actually taking a shot at diplomacy:

I am a big fan of Drew Brees. I think he’s truly one of the greatest quarterbacks, but he should not have taken back his original stance on honoring our magnificent American Flag. OLD GLORY is to be revered, cherished, and flown high...

You ran from the flag and dodged the draft

Damn. History can be such a bitch sometimes.

And four centuries of it has been too bloody much. Full marks to Brees, and may the numbers in his demographic continue to increase.