Darnold, Rosen Will Enter the Job Force This Spring

Published on 3-Jan-2018 by Alan Adamsson 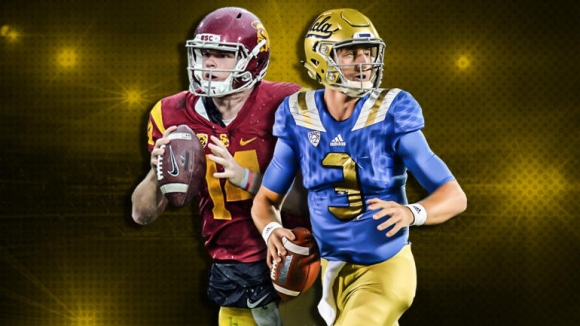 There's a veritable cornucopia of screwy things in the NFL, and the draft is one of them.

Not necessarily the way amateur players are dispersed to the clubs, but in the money that's doled out with it.

It's inherent. In a league where guaranteed money in contracts is optional, it's one of the few times players have any negotiating leverage.

And of course, they're unproven players at the pro level. It's like the old Holiday Express commercial campaign.

Even screwier is the NFL not having any semblance of a minor league aside from college football, which is just so wrong on so many counts.

Among them is they're actually different games, and there's no striation of ability levels in college like baseball's farm systems.

But when the NFL's draft report shows you're a cinch to be selected and, in his case, $2.9million in certain cash is dangled in front of him, what would you expect him or any other early-20s-something to do?

The same thing you'd expect Josh Rosen and Sam Darnold to do, not to mention Josh Allen?

So, let the overanalyzing begin:

The NFL could actually use a wave of new slingers with strong upside.

This could be why the underclassmen's pre-draft scouting grades were so optimistic about their chances.

Louisville's Lamar Jackson should join the party any day now, too.

Add the likes of Baker Mayfield, Mason Rudolph, and Luke Falk, and odds are somebody from this crop will become a stalwart in the NFL.

Hopefully, they'll all go to teams that give them a chance to mature before being tossed into the cauldron.

No matter what, though, they'll have a stash in their bank accounts.