Dalton Does Dallas; Did Dak Just Get Served? 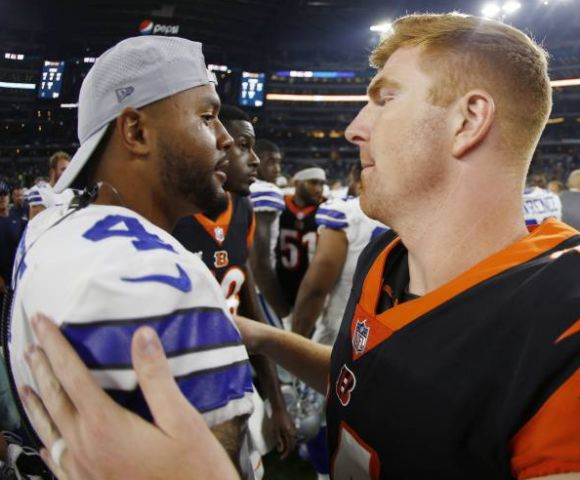 Maybe the spin coming outta the Dallas Cowboys camp isn't spin at all.

Maybe they're sincere when they say not to read anything into their signing of Andy Dalton more than they simply figured a veteran backup to Dak Prescott would be a good idea.

Maybe Covid-19 will indeed go away just like that.

And, come to think of it, Playboy did have some mighty fine articles for your reading pleasure.

After all, the 'Boys are still basking in the afterglow of an extremely promising draft night, and they're coming off a season where they were the best offensive team in the NFL while only surrendering 20.1 points per game.

So who needs spin?

Prescott wound up exchanging his Mississippi State maroon-&-white for Dallas' iconic navy, silver & white in the 2016 draft in the fourth round after the Cowboys saw the likes of Carson Wentz, Paxton Lynch, and then Connor Cook -- slingers they were looking to get -- go off the board.

What they got outta the QB position for their initial four-year investment plus last year's market-force contract was a single playoff win.

@TheNotoriousMMA you free next week in New Orleans??? pic.twitter.com/tBBMWVKocn

In this era of mobile and quasi-mobile QBs, it's good to have a quality backup ready to step in with little or no loss of performance quality. The 2017 Eagles can attest to that.

Subject to a negotiating disaster being avoided, Prescott's got first dibs on his starter's role. How long he remains as the starter is the issue.

And that's down to him now more than ever before.

Besides, the Cowboys needed a second slinger who, you know, has actually thrown a pass in the NFL. By adding Dalton, they now have a grand total of one.

Since 2011, Andy Dalton is just one of SIX QBs in the NFL to accomplish the following:

He now joins the quarterback room in Dallas behind starter Dak Prescott. pic.twitter.com/qxee4Ptmat

The former TCU Horned Frog also took the Bengals to the playoffs in his first four seasons, which is impressive. The fact they went 0-4 in those games really isn't, but at least dude's got the experience of having been there, and he's still only one playoff victory behind Prescott.

Dalton was raised in Katy, situated within Houston's metro area, so he's coming back to his home state. He'll also be returning to Cincinnati this coming season in Dallas' third week of action. Barring something drastic, that's probably too soon for him to get anything more than a token appearance.

That could well be fan sentiment if the Cowboys' first two games -- against Pittsburgh and Baltimore -- don't go well.

The omnipotent Jerry Jones is still waiting for Prescott's contracts to go better. The sticking point now is duration; Dak wants a shorter term than Dallas does. There's still ample time for resolution, but spin or no, Jones's hand just got stronger.

It's clearly not lost on Jones that Dallas hasn't won a Super Bowl in 24 years, and he's of the opinion his 'Boys are in the mix. Bovada says it'll be as a +1800 bet, though, sixth in line with Kansas City the favorite at +600 to repeat.

OG's 77 this year. He's in now mode every season, but in this one, he's covering his own bets. Dak's on the clock because of what'll be a massive contract if nothing else.

On second thought, it's more like dude's on a timer.