Charger Bashing Is More Popular Than the Chargers

Published on 3-Oct-2017 by Alan Adamsson 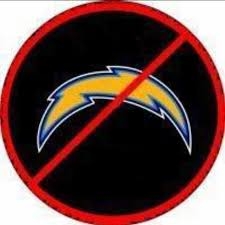 Once upon a time, pro sports franchises ruled North America.

Taxpayers and businesses were extorted into doing their bidding.

Either the locals ponied up to build them new playpens, or they'd pick up stakes and leave to a place where someone else would.

Then, a funny thing happened on the way to owners' unbridled riches.

Back in 1998, North Carolina voters told Carl Pohlad -- who'd move his Minnesota Twins to Raleigh if they build him a new stadium -- to stuff it.

Since then, only MLB's version of the Deep State made it possible to move a franchise, and the Montréal Expos became the Washington Nationals.

The NHL and NBA had one franchise each re-locate since then:

Then there's the NFL, heretofore impervious to public opinion and civic ethics in general.

But maybe this well-known sequence of events will ultimately slap a hint of sense to them:

The jury's still out regarding the Raiders and Las Vegas, but karma's already caught up to Spanos and his Chargers.

The Twitterverse is having a field day with what looks to be the Chargers' minimum two-season stay out in Carson. It's not hard to do:

Chargers QB Philip Rivers remarked that he knew the FG missed and the Dolphins won by how loudly the crowd cheered.

It was beyond obvious how much turquoise was in the stands.

That's the trend. There may be NFL fans in LA, but they're cheering for other teams. That'll happen after two decades of no local team.

The NFL is supposed to be a ratings machine. The numbers have been dented here and there, but it still manages to do all right.

Except the Chargers in their new home:

Incidentally, that Dolphins-Saints game was both unremarkable and played in London. Kickoff was 6:30am, Los Angeles time.

The NFL already said the Chargers' return to San Diego is a non-starter. Frankly, at this point, Spanos has probably torched that bridge, anyway.

Nothing's for certain until Kroenke's new stadium complex is built and an NFL season's in the books there.

Still, this sorry episode of imperious decisions looks like the first real blow to The Shield's image of franchise invulnerability.

And at least for now, the resultant schadenfreude looks like it'll become a cottage industry.