Bucs Push Away from Cowboys for Last-Minute Comeback Win 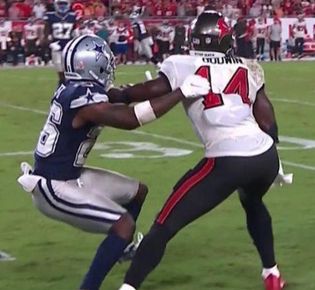 The first game of the 2021 NFL season has provided proof yet again that -- fantasy points aside -- there's still only one stat that matters.

That's good, because damn near every other number in this clash between defending Super Bowl champion Tampa Bay and current most valuable franchise Dallas seemed to have pre-season written all over it.

Thankfully, those bore-a-thons are being phased down to one or two after this season. All teams but two played three exhibitions this summer, and from the looks of this game, it bears watching to see how one less rehearsal affects the rest of Week One.

The Cowboys, though, can't use this as an excuse. They and the Steelers did play four exhibs, so it could be telling that they wound up matching the Bucs miscue-for-miscue.

When all was said and done, Tampa Bay prevailed in a 31-29 decision because Tom Brady did what he always does:

Tom Brady has now engineered 49 game-winning drives in the 4th quarter or overtime in his career.

What Dallas gained in turnover advantage -- only one to the Bucs' four -- they gave back in drops and missed kicks, with Greg Zeurlein leaving four usually sure points on the field with a missed 31yd FG and a PAT.

So, most likely, dude's been getting in a bitta extra practice afterwards.

However, for a dude who hadn't taken a snap in almost a year -- apparently whiling away the time by practicing capitalism -- Dak Prescott looked in mid-season form.

The Mississippi State alum racked up 403 yards on 42-for-58 passing, accounting for 3 TD's and only victimized by a tipped INT. That added up to a passer rating of 101.4, the calculation of which continues to be part of the secrets of the universe.

Can't argue that they're hard facts, but often a game is decided by other factors.

With both teams' ground games all but negated, most of the fun was had by receivers and defensive backs. Take Rob Gronkowski, for instance. When he's not making use of 21st Century grip technology ...

He's reeling in a pair of paydirters, the second of which was his 100th in the NFL:

The Cowboys' Amari Cooper had himself a glorious moment or two, too:

Those were all cut-&-dried, as opposed to the adventures of the Bucs' Chris Godwin, who figured prominently in the proceedings.

In one key play, dude committed a grave, grave sin so close to the goal line:

Fumbled at the goal line!

But then, in the drive that really mattered, dude did what a dude's gotta do and let judgment run its course:

Offensive Pass Interference or a great throw and catch? 🤔

And really, what self-respecting official wants to butt in on the natural order of things when the clock's ticking down, the game's in the balance, and the immortal one hizzownself is working his magic?

It's kinda like Jacob deGrom and Edwin Díaz throwing the same pitch on the outside corner and only deGrom gets the call.

Then again, reputations are earned.

Thanks to Godwin's non-call catch, the Buccaneers merely had to run down the clock. With no timeouts, that meant Brady pitching the pigskin to whomever he noticed out of bounds to keep the time on his side.

Then, with mere ticks remaining, he turned the duties over to Ryan Succop to wrap it up:

Things you love to see: pic.twitter.com/xrOAbVdh7X

And so the Super Bowl race begins, with vaxxed fans buying tickets and commercial slots virtually sold out.

All it needs now is two teams, and assuming they get their raggedness sorted out between now and January, we just might have seen the NFC's representative.

Whether its the Bucs or the 'Boys remains to be seen.