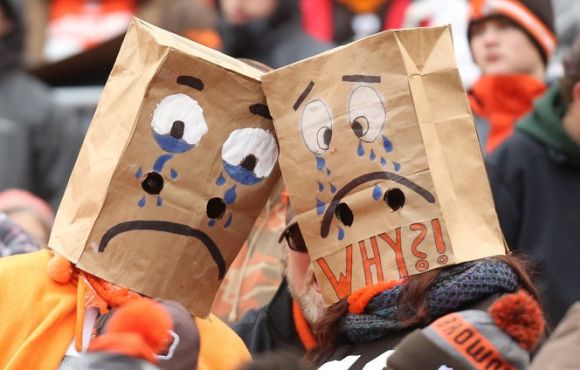 So much for driving people to drink.

This is the 21st century, and the time for organic medical alternative treatment is now.

That's what a fair number of Cleveland Browns and Cincinnati Bengals fans believe, and they've taken their case to their government.

After all, who among us would argue that supporting a sucky team is an affliction requiring medical treatment?

Since both teams have established that it doesn't matter who their coaches or chuckers are, they are serial underachievers.

Every season, it seems like hope springs eternal with the arrival of their top draft choices and/or new acquisitions. By the start of every October, it's clear that the only thing springing is another leak.

Full marks to these fans, then, for being proactive and petitioning the State of Ohio to recognize their torment and allow them access to medical marijuana to soothe their affliction.

And why wouldn't they? Check out some of the ails some contend weed can damn near cure:

Don't think for a moment that this petition's a whim. The organizers are serious.

Check out what Ohio state law requires for something like this to go forward, and then understand that dudes powered right through them:

Of course, the Browns and Bengals have been losing so much, it's not hard to realize the petitioners could either dwell in futility all week or dwell constructively.

The organizers surely had a clue about weed and its recurring appearance throughout history:

And hell, they're even seeing the OG Patrol getting up to speed on medical marijuana:

And so, in Yoda-speak, forward they push.

Next up is a hearing on Wed 12 Feb. If they make the cut, the final decision will come this summer, just in time for training camp.

If there's any doubt how insidious Browns and Bengals fandom can be, this clip from the 2018 season oughta be Exhibit 1:

For all we know, dude could be a librarian. An intense one.

Ohio needs this petition to be approved. Unanimously.