'Any Given XFL Game' Might Finally Become a Thing 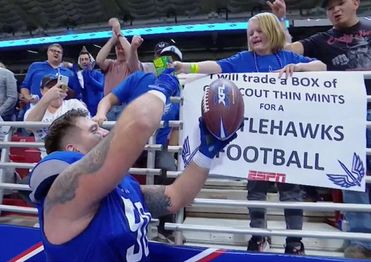 Rays of sunshine keep beaming down on the family-friendly XFL.

Today's Week 3 action basked in at least three of them:

They even got a family-friendly moment that mighta tugged at the left cockle of Vince McMahon's heart:

It was that kinda day in St Louis, still stinging from the NFL team they stole from Los Angeles being stolen back by Los Angeles.

The BattleHawks had to wait until today for their home opener, and both fans and team turned it into an event:

Damn. Maybe the next XFL franchise should go to San Antonio. They did a decent job making chicken salad outta the hand they got dealt by the AAF.

As seen, in the midst of enjoying the BattleHawks's 29-9 pasting of New York's Guardians, the hometown fans also got to see a bitta XFL history when Joe Powell scampered 84 yards on a kickoff-return reverse:

It's still a small sample size, but the XFL's kickoff return rules are creating more action with less injuries.

Most importantly, and by definition, they've found a way to keep the kickoff in the game.

The league's also given a 180º-different alternative to players preparing for an NFL draft. Instead of sitting out a bowl game for fear of injury, ex-West Virginia DB Kenny Robinson is using the XFL as a second chance to show what he can do.

It paid off in this game, as dude recorded his first pick as a pro:

Proof yet again, there are still traces of the original XFL. Why deny they origins?

And it's not just the players honoring the past, either:

But back to the feelgood. As with all players except QBs -- who get paid a robust premium -- dude's earning $55,000 for this season. In his case, that's helping him assist in his mother's battle with cancer.

Early season sensation Jordan Ta'amu had a Jimmy Garoppolo-style week off in this one.

Dude was a modest 12-for-18 for 119 yards, spending most of his time handing off to Matt Jones, who racked up 95 yards on 15 carries, and Christine Michael, who gained 44 more with a touch in 13 attempts.

As to the Guardians, the less said, the better. Dudes have issues, as evidenced by their deploying three equally ineffective slingers:

Put it all together in highlight form, and it looks even better for the BattleHawks:

Everything was all warm-&-fuzzy for the hometown fans, but this game followed what seems to be a recurring arc in the XFL's early going. It wasn't close.

Same thing in the day's other clash, but at least there was a twist.

The Los Angeles Wildcats needed a victory in the worst way, and they claimed it in the best way. Dudes took down the previously undefeated -- OK, 2-0 -- DC Defenders, 39-9, by stifling one of the league's few recognizable names.

Not to mention their last touchdown of the game.

Sooner or later, these games have gotta tighten up. Until then, the ATS spreads will likely keep increasing.

The league can only hope the same will be said of the attendance and ratings figures as the novelty of its rules continues to be a main attraction. That can't go on forever, though.