Wolverines Continue to Be the Buckeyes' Bitch 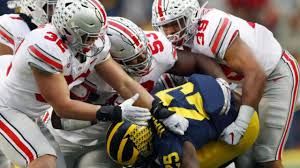 As in other sports, there are streaks in college football where one team just has another team's number.

We even see it in rivalries that aren't batshit crazy.

Fans of those teams celebrate or mourn the results while the rest of fandom takes note, shrug, and go on to other things.

If only it was that way when Ohio State and Michigan play.

Every damn season, the media hype is inescapable.

The Maroons are back in the sport again at the Division III level. Maybe they should call the Wolverines and hook up again. At least Michigan would stand a fighting chance.

The game's got all the impact of, say, Ohio State-Indiana or Ohio State-Penn State, both of which let fans tune in, check it out, and get on with the day like they do with most other rivalries that doesn't involve their interests.

But the hype does its job every season. This year's 56-27 blowout was a massive ratings winner yet again.

The Buckeye's have had one -- count 'em: one -- competitive game this year, and that didn't have as much to do with Penn State as it did Ohio State not being able get out of its own way.

This wasn't the case -- again -- at the Big House this weekend:

Same as it ever was.

And until someone in that conference steps it up a notch -- or possibly a couple of notches -- that's the same as it'll ever be.

Somehow, Michigan's assumed the mantle of Great White Hope against Ohio State, but it's long past time that they deserve it. This is just another game now, with 'way too many bells and whistles.