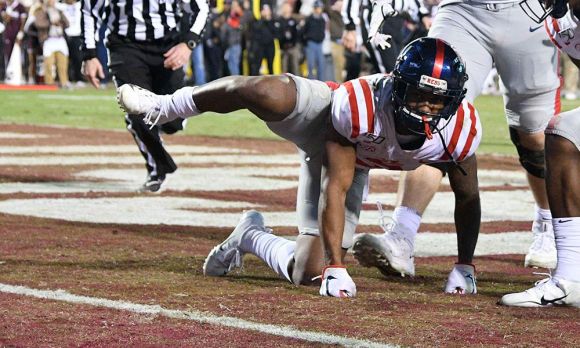 You know those games where they say you should throw out all the record books?

Just in case there's a chapter somewhere about the merits of common sense.

And that should be required reading for players like WR Elijah Moore of Ole Miss, who singlehandedly presented the Egg Bowl to rival Mississippi State and making the Bulldogs bowl-eligible in the process.

We shoulda known something was off-kilter earlier in the game.

Moore also returns punts for the Rebels, and on one of them in the fourth quarter, dude introduced the world to the concept of a dyslexic fair catch:

That’s… not how it works. pic.twitter.com/aa4yK29qKQ

Not sure if that knocked any remaining sense outta him. I sure didn't knocke any into him.

Someone might wanna tell Moore that's not exactly why DK made it into the league.

Metcalf was lucky in the sense that Ole Miss won that game.

Moore, not so much. And in tribute to the absurdity of it all, here it is in Russian:

the Egg Bowl was on Russian television and the ending is the FUNNIEST THING THE ANNOUNCERS HAVE EVER SEEN pic.twitter.com/Owvu6iAgRq

That's right. The Rebels orchestrated a last-minute drive, scored to possibly tie the game with a PAT, and Moore's penalty put a few extra -- and as it turned out, crucial -- yards into Luke Logan's 35-yard attempt.

Obviously, after that leg-lift, any thought of going for two had gone the way of the dodo bird.

The upshot: That's how Ole Miss burnished its image as Ole Piss.