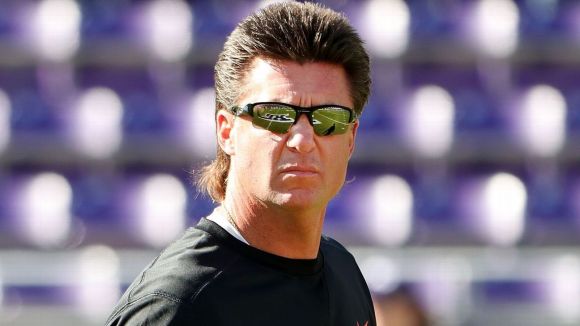 That noted philosopher and social crusader, Mike Gundy, is at it again.

The current Oklahoma State head coach and man of a certain age has been using his weekly pressers as an opportunity to spew his unrelenting gibberish to the masses.

A few weeks back, our favorite Mullet preached on social media while simultaneously making fart noises with his mouth.

It's an unusual strategy, but devastatingly effective.

This week, Gundy decided to answer a harmless question about player transfers with more of his signature crazy talk:

Yep, the words old man and lawn come to mind.

However, Gundy doesn't appear to understand the meaning of the term liberalism, but there's no point interrupting when he's in a groove like that.

He also advocated for the snowflake theory, as it appears that a day in the life of Mike Gundy involves him righteously defending his football program against those among us with delicate sensibilities.

Speaking of his football program, the Cowboys aren't exactly reinventing the game at the moment.

That wild and wacky loss to No 6 Oklahoma dropped Okie State to a rather mediocre 5-5.

Perhaps Coach Gundy could skip his weekly rant and focus on a little game prep.

Or maybe he could find that elusive balance of lunacy and success.