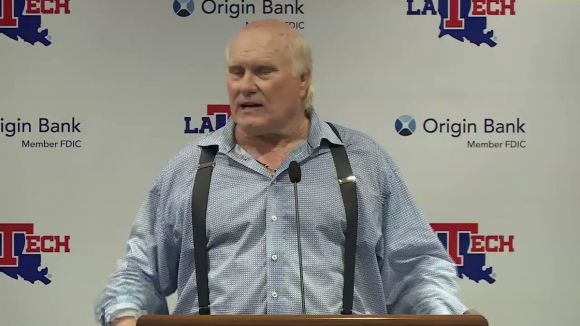 Since Terry Bradshaw rarely ever talks out loud on Fox, it's always a treat to hear him wax philosophic on any subject.

Well, put down that shingles medication and listen, because the Blond Bomber has something to say.

Our topic for today is University of Texas slinger Sam Ehlinger, who's found his way onto Bradshaw's savvy radar.

Unfortunately for the Longhorns' junior, the feedback was less than flattering.

Lets hope not, because this was a savage burn, delivered as only an aging hick can.

Damn, Terry really went for the jugular there, stinging the kid with harsh words like ain't.

Even more alarming than possible illiteracy is the Ruston Rocket's obvious lack of knowledge regarding college football.

Of course, we're not doubting his allegiance to his alma mater, Louisiana Tech, whose administration apparently just allows Terry to show up whenever he likes and shout nonsense words.

What does concern us is the fact that he doesn't seem to understand how recruiting works or have any clue about the  recent Texas QB depth chart.

Perhaps the worse part is that Ehlinger is actually pretty darn good at football.

Texas is hooking up with Lousiana Tech in Week 1, so they can thank Terry for the beating now or wait until after the game.