Published on 2-Jan-2020 by Alan Adamsson 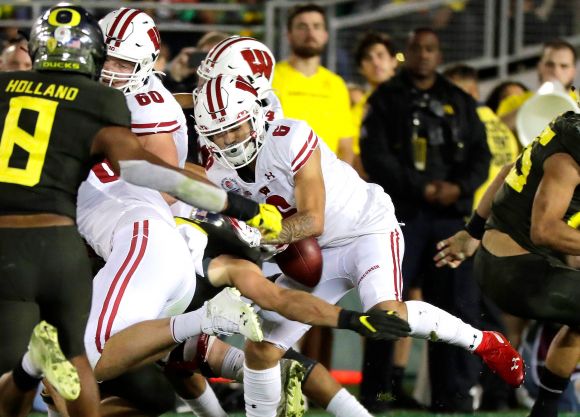 The College Football Playoff is always gonna be the bowl-season headliner these days, but date-wise, it's a moving target.

For sports fans, New Year's Day in this era is all about the NHL's Winter Classic followed by the Rose Bowl.

Maybe it's the atmosphere surrounding both events, but for whatever reason, they're money when it comes to being compelling.

The Oregon Ducks came to Pasadena ready to display their progress in morphing from a flash-&-dash club to the sorta trench warfare approach the perennial CFP contenders take and discovered they've still got a 'ways to go.

This didn't stop them from beating the established ground-&-pounders from Wisconsin, though, to the tune of a 28-27 victory that proved once again that what's on the scoreboard is all that counts.

The Badgers proved this in spades:

The Ducks may have not been the toughest team on the field, but they were the most tenacious.

They had to be with the likes of Badger TE Quintez Cephus blasting tacklers who got in his way:

Quintez Cephus bounces off the tackle attempt by Oregon LB Troy Dye and Dye end up on the ground! SHEESH!! pic.twitter.com/Q6jEDAWRbW

Not only that, it was Wisconsin showcasing the speed, with return dude Aron Cruickshank doing in one play what most Badger drives couldn't: sustain a drive all the way to paydirt.

Oregon knew opportunity when they saw it, though. If Wisconsin didn't protect the ball -- or simply dropped it, as punter Anthony Lotti did, again -- not only were the Ducks there to pounce, they made quick work transporting it to the house.

It was that kinda day for the Badgers.

Maybe they kept Herbert's passing in check, but they let him do a Trevor Lawrence three times -- the crucial one was a 30-yard gallop -- and the irony was complete.

A Pac-12 team did in a Big Ten bulldozer on the ground, even though the latter seemingly controlled all day:

Oregon did hold Jonathan Taylor to 94 yards on 21 carries -- and ripped out a fumble -- which was a factor in their surrendering a pair of FGs instead of TDs. Turns out that was the difference.

Interestingly enough, the Ducks' only two losses came against teams with freshman QBs -- Bo Nix and Jayden Daniels --  but then again, Auburn and Arizona State knew to secure the ball. Otherwise ...

Dudes are definitely on the cusp of being a CFP contender again, while Wisconsin's still trying to find a way to break through.

Until then, if there's ever a consolation prize that rivals the title game, it's being here in Pasadena on 1 January.