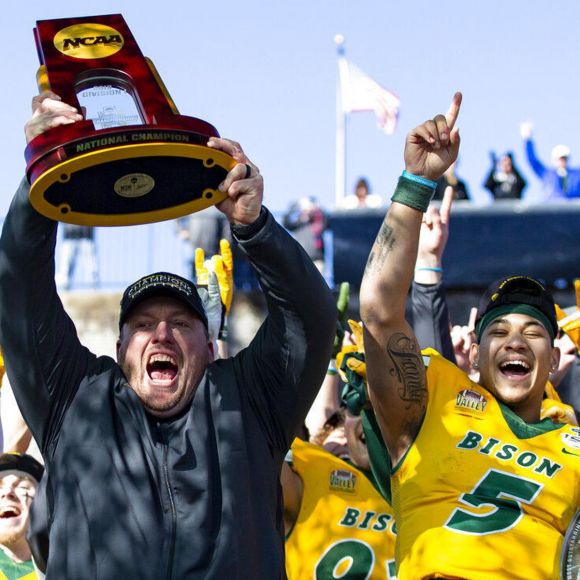 This gives taking them one at a time a whole different perspective.

Mainly because the defending NCAA Division I -- aka FCS -- champion North Dakota State Bison have a grand total of one game scheduled in 2020.

As far as they're concerned, though, it's gonna be worth it.

What else would we expect?

It's the Year from Hell.

Dudes are a member of the Missouri Valley Conference, which decided the cost of Covid-19 was more than its income and ethical standards could bear and thus shifted its league schedule to springtime.

However, that's only for conference games.

So does fellow conference member Missouri State. The Bears don't wanna miss out on their annual physical beatdown in the name of their athletic department's budget. They're still gonna go to Norman and get their whuppin' by the Sooners.

Dudes also decided that, while their gear's out and all, they'll take on Central Arkansas in an all-Bear home-&-home.

Apparently, they figure a three-week bubble is something they can do.

Well, it is a bubble.

Anyway, the Southland Conference has also decided defer to Covid-19, but Central Arkansas thought otherwise. As a result, they're looking for non-cons to fill out their schedule. Clearly, it's a tall order, as indicated by the sorta-doubleheader with Missouri State.

This Bear crew isn't forging ahead solely for money, though. Central Arkansas was coming into the season as the Southland's defending champion and favored to repeat. They weren't gonna be denied making something outta what they believe is a special edition of their football history.

Whatever. They're in it now, and clearly, they were looking for a special kinda game as a highlight for their season.

It just so happens that the Bison were thinking the same thing but for a different reason.

One thing led to another, and all things considered, North Dakota State and Central Arkansas crossed paths with the same idea in mind. They'll meet in the FargoDome on Sat 3 Oct, and it'll be the only game the Bison play this fall, and for only one reason:

Sources: Top QB prospect Trey Lance will have a showcase game this fall. North Dakota State will play a lone game against Central Arkansas, which will be the buzz of NFL circles. https://t.co/bnCa1UOHfD

No other college program in the nation can boast it produced two first-round slingers in the NFL draft over the past six years, but Trey Lance has a shot at joining Carson Wentz and giving the Bison that distinction.

So the hype's gonna be there for this one.

It won't be what the originally scheduled Sat 5 Sep game at Oregon woulda been, but hell, it's not every day a team's gonna practice for a lone regular-season game to honor one of its own.

It's also a spiffy recruiting point.

Odds are that game will be Lance's swan song as a Bison.

Come spring, the team will join its conference mates for an eight-game slate, and who knows? Maybe the dude calling signals will pick up the baton and carve out his own NFL résumé. North Dakota State has proven it can help make that happen, and they'll toss in the fanfare whenever the opportunity allows.