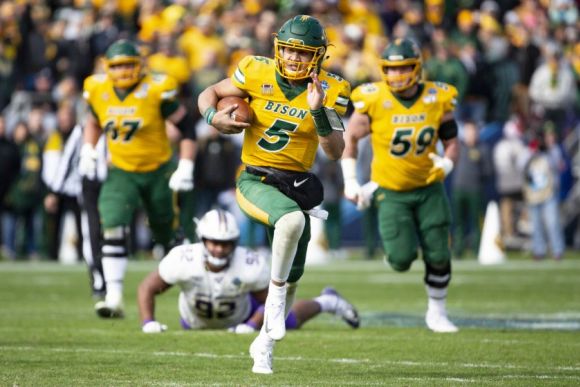 The program that gave Philadelphia Carson Wentz just did something the college football world hasn't seen in 126 years.

The Elis were smashing their opponents. Only Army (lost, 12-5) and heated rival Harvard (lost, 12-4) managed to score against them.

The opposition's been a tad tougher for the North Dakota State Bison, but they've still managed to sweep aside 36 of them in a row coming into the FCS title game against a strong James Madison squad.

The Dukes weren't strong enough, though, falling 28-20 in the championship game at Toyota Stadium in Frisco, Texas:

Technically, this makes North Dakota State the reigning NCAA Division I titlists, as the Football Bowl Subdivision is an entity unto itself.

Better yet, the FCS champion is the survivor of a 24-team gauntlet. All ten conference champions are included, the selection committee is just charged with adding a few at-large trimmings.

Yes, there's still bitching about who's in and who's not, but at least it's farther down the pecking order, away from those who earned their spot by proving it all season.

The Bison didn't necessarily have any close calls in the regular season, unless you count their victories over UC Davis (27-16) and South Dakota State (23-16) cliffhangers.

What sets them apart, though, is their consistency. The program has a system in place, hiring coaches and recruiting players who work well within it instead of tailoring their team to their talent.

Dudes are surely proud of their winning streak, but they also aren't scheduling to maintain it. Next season, they open in the snakepit that is Autzen Stadium, home of the Pac-12 favorites-in-waiting Oregon Ducks.

The challenge can only make them better. On the other hand, Oregon had better watch out. Odds are this won't be the usual Week 1 shakedown cruise. North Dakota State will look for more than picking up an appearance check.

Over the past nine seasons, North Dakota state has as many FCS titles as losses: Nine.

If Oregon gets the best of them next Labor Day weekend, odds are they'll be even money to keep that stat stable by picking up yet another FCS championship.