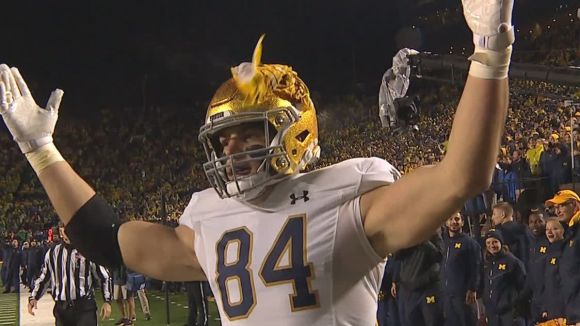 The Michigan Wolverines have been a pretty substantial disappointment this season.

However, they appear to have decided to purge all of this angst and frustration at the expense of Notre Dame.

The Fighting Harbaughs did unspeakable things to the Irish this weekend in a rather moist Ann Arbor.

While exposing Notre Dame -- and specifically, their offense -- as fraudulent, the 45-14 result seemed to function as prime time therapy for Coach Jim and his student-athletes.

Brian Kelly and his perpetually overrated bunch even suffered the indignity of being abused by Michigan students, who used their free rally towels as an instrument of protest:

The Michigan student section is throwing their rally towels on the field to express their displeasure with the phantom DPI call. pic.twitter.com/dcJ83j7hme

Indeed, the call in question was just atrocious and negated a Michigan pick that then led directly to a Notre Dame TD when the game was actually still in doubt:

Anyway, that's what raised the ire of those incorrigible kids in the student section, one of whom displayed some remarkable accuracy:

Notre Dame's on the board! Ian Book hits a wide open Cole Kmet for the 7 yard TD... Michigan fans threw towels on the field and one landed on Kmet's helmet LMAOOO! pic.twitter.com/rID1TXIqXg

It was quite resourceful to repurpose those towels like that:

Is that you? Towelie?!!!! Michigan Notre Dame towel fest. Towels flying everywhere. Some dude threw one like a sticky grenade in halo 3 on the NOTRE Dame players helmet. The next one took out the camera. Lmao pic.twitter.com/MDVHmp6suq

While launching rag rockets onto the field was cathartic, the 28 consecutive points scored by the Wolverines afterwards also improved their mood.

The Irish were drenched in failure.