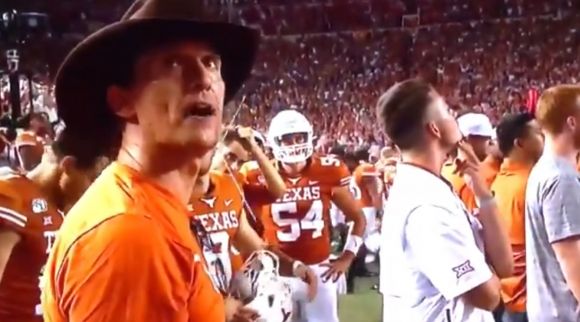 LSU and Texas put on a show worthy of the hype and the primetime audience on Saturday night.

Joe Burrow and the suddenly potent Tigers' passing game really did some work on a young and completely overwhelmed Longhorn secondary.

The Bayou Bengals dropped 45 points on the 'Horns at their place, a development that certainly disappointed many a Texas booster.

It also may have broken the brain of Matthew McConaughey.

That was Burrow putting the game on ice with a ridiculous 3rd-down 61-yard kill shot late in the fourth quarter.

And here's the Academy Award winner perfectly encapsulating the feelings of an entire fanbase.

Of course, one of his numerous responsibilities as Minister of Culture is to always have his finger on the pulse of the average Longhorn fan.

Apparently, Matthew completely snapped after the game and went rogue inside the stadium.

He eventually lost interest and vacated the booth, driving off into an unknown future in his 2019 Lincoln Nautilus.

Wooderson decided to pick up a few dudes on the way though, trying to improve his suddenly damaged karma.

It's his only rule.