Auburn Beats Alabama by a Doink and Bad Math

Published on 1-Dec-2019 by Alan Adamsson 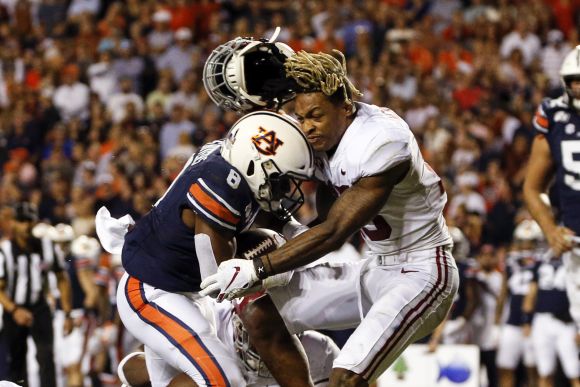 It's not every day you see a game won by a trick play that doesn't need to be run.

In a wide-open and wacky day on the Plains, the Auburn Tigers deked Alabama's Crimson Tide on a threatened punt that gave them a game-ending first down to seal their 48-45 Iron Bowl victory.

Tiger coach Gus Malzahn went grandmaster-cerebral on this one and caught Nick Saban & Co so off-guard, he was reduced to calling it unfair.

Auburn lined up the punter at wide receiver to try to keep Waddle on the sideline. Bama noticed it late and took a penalty in the confusion. So simple, but so smart by Malzahn. Took the game straight out of Bama's hands pic.twitter.com/u0g87fz7as

Trying to keep Jaylen Waddle off the field was a no-brainer. Dude was a one-man wrecking crew out there, scoring four touchdowns and terrorizing the Tiger secondary all afternoon.

Najee Harris showed a good air game, too, as part of his 27-carry, 147-yard ramblings:

Sophomore slinger Mac Jones justified why the Tide recruited him, going 26-39 for 335 yards and four touches.

Those two INTs he gave up didn't help the cause, but they were par for the course in a game where accuracy was at a premium.

The Tigers may not have carried the day stat-wise, but their blend of strategizing and feistiness was a potent combination.

Simply put, Alabama made mistakes. Lots of them. Their 14 penalties were the most a Tide team under Saban had ever committed in one game.

And if anyone was anywhere near the media coverage, they heard that 'Bama's missed 101 field goals under Saban's range.

The latest one was damn near cruel:

OFF THE IRON! NO GOOD. pic.twitter.com/kkfxgchwLV

On the bright side, at least the Tigers didn't return it for a coast-to-coast touchdown.

Besides, you'd think hitting a post would be worth more points. In theory, it's harder to do.

It's difficult to believe now, but this game was tied 10-10 Iwith less than six minutes left in the second quarter.

After that, there were

Sit back and relax. All that's gonna take a while:

Some might say this depends on your point of view.

Former Tide OC and Saban whipping boy Lane Kiffin weighed in on the subject, as he is wont to do on all things Alabama:

U have to admit this is 😂 @AlabamaFTBL @AuburnFootball Always exciting Iron Bowls!! #3-0 Good luck in bowl games pic.twitter.com/HlnE5O9Tgm

This result also means that, for the first time since Selection Committees have been studying video and surveying stats in posh spas, the CFP bracket won't be called the Alabama Invitational.

According to some, though, it won't be for lack of trying:

Alabama still hasn’t defeated a Top 25 team this year. So I’m sure selection committee will move Tide up to No. 4 this week

Gary Danielson explaining why a two-loss Alabama team that didn't even win its division absolutely has to be part of the playoff picture pic.twitter.com/2KakFEqnaV

While Auburn now sets its sights on another 10-win season based on a bowl victory, Alabama may have another challenge.

That'd be figuring out who's gonna be around for their bowl game. Gotta think a few dudes who have their sights set on the NFL Draft might wanna give an ordinary bowl a pass.

If so, they've just ended their college careers by being part of a game that was anything but ordinary.