Stephen F Austin Dumps a Dookie All Over the Blue Devils 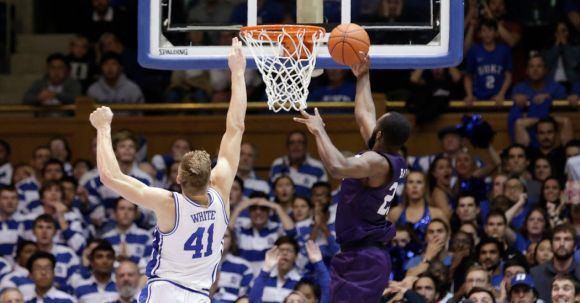 Think about this for a moment:

Then consider the post-game comment of Dookie guard Cassius Stanley, who seems to have a handle on a few of the game's basics:

After the smart kids were shocked, 85-83, on Nathan Bain's buzzer-beating lay-in, Stanley displayed an amazing grasp of the obvious:

[Coach K] told us at halftime about getting back on defense.

It's kinda what we deserved. We didn't listen to him, and it hurt us eventually at the end.

The basic assumption is talented basketball players go to Duke to listen to Krzyzewski. That way, they'll be better prepared to compete against more experienced players and teams.

Seems like that also applies to the Southland Conference.

The Stephen F Austin Lumberjacks -- from the globe's only city named Nacogdoches -- features seven JC transfers in a roster where everyone plans to utilize all four years of college eligibility.

Dudes were still smarting from their first loss of the season -- a 69-57 drubbing at Rutgers -- and determined to make a showing in Durham. After all, the only sure way a Southland team makes the Big Dance is to win the conference, so battle-testing with a tough non-con schedule is a necessity.

Now, the Blue Devils understand why SFA does it and how the 'Jacks have made the NCAA tournament four of the last six years. They know tenacity:

The school's namesake -- Stephen F Austin, hizzownself -- is hailed as the Father of Texas because he was a man with a plan.

So are the 'Jacks. They didn't do anything exotic, exacting damage inside the paint -- 64 points -- which is their game. They forced Duke turnovers with a hyperactive defense and limited their own.

It didn't hurt that the Blue Devils couldn't buy a free throw. 24-40 from the stripe rarely bodes well.

Just possibly the coolest part of this game was 'Jack coach Kyle Keller going Old School and letting the players play when the rubber met the road.

Even the announcers were surprised that he disdained the usual overcoaching tactic of breaking rhythm amid chaos by calling a timeout:

MAYHEM 😱@SFA_MBB TAKES DOWN NO. 1 DUKE ON A LAST-SECOND LAYUP pic.twitter.com/3VqVyvUbbU

We're more into standings and results around here than rankings, what with the big-brand bias and perspective that accompanies them.

So, the fact this is a non-con's first victory in front of the Cameron Crazies since St John's did it in 2000 is more impressive than this being the third big-brand No 1 to fall already in this young season, after Michigan State and Kentucky.

The 'Jacks were picked to finish fourth in the Southland, and defying that may well be their biggest challenge in 2019-2020.

In case they fall short, it wouldn't hurt if Rutgers lights it up the rest of the year.