Evansville Drops a Purple Ace on No 1 Kentucky 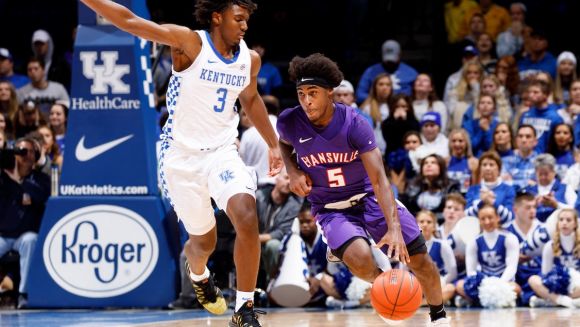 Their documentary wasnt feature-length and wasn't entitled We Are Evansville, but the Purple Aces have a story arc similar to Marshall's Thundering Herd.

Dudes also have a devastating plane crash in their history. It happened on 13 Dec 1977, and there were no survivors. The lone player who didn't make the trip was killed in a car accident shortly after.

To this day, there's a swell of sympathy for the program's resilience.

Bigger picture aside, dude were all of that against Kentucky's vaunted Wildcats.

Each column of the stat sheet looked as close as the score. That's a hint that the Aces knew who they were; their challenge was keeping Kentucky's thoroughbreds from being who they were.

Yes, this is where the well-traveled Sam Cunliffe -- Arizona State and Kansas -- has landed.

Dude came off the bench in this one to pop 17 and pull 6 boards. Those helped offset his 6 turnovers, but hey. Gotta break a few eggs in a scenario like this.

This pairing was surely a nod to Aces coach Walter McCarty, a program alum who carved out a decent career in the NBA.

Dude accepts reality -- his crew's been predicted to finish eighth in the Missouri Valley Conference -- so in his second season there, he's made the logical decision to focus on hustle.

In what basketball euphemistically calls a floor game, the Aces mopped the court with Kentucky. They beat the bluebloods to everything on offer.

It'll surely serve them well when they take on the IU-Kokomo Cougars this Thu 14 Nov.