Angry White Dude: This Is Embarrassing 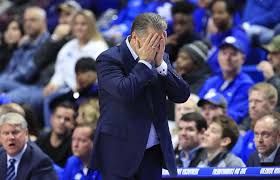 There it was, among the headlines touting world chaos and extreme weather conditions:

No 1 Kentucky Stunned at Home by Unranked Evansville

In reality, just one word would've summed it up quite completely when a top-ranked team just tosses its jocks out on the court and expects that to suffice:

That word fits to a tee what happened in Rupp Arena last night, but it might not really be what you're thinking.

It's embarrassing to hear Coach Cal say -- season after season, game after game, year after year -- that he has a team of 18-year-olds.

It's easy to see that there were several things going on last night in Rupp Arena that were embarrassing when it comes to Kentucky basketball.

Without a doubt, the most embarrassing thing that went on last night in Lexington was the lame ass crowd.

No team fears playing in Rupp Arena. You can yell across the court at someone, and they'll hear you during the game, which is something you can not say that about Duke.

The Kentucky student section is a small group of maybe 1000 seats. Season ticket holders fill up the bottom sectino of the 23,000 seat arena. A good number of those tickets have been in the family for generations.

The real fans sit in the nosebleed seats. You can't hear them because they're so far away from the action.

One thing you learn really quick if you get someone to give you those lower arena seats: Don't make any noise!

Dress like it's a fashion show, make sure people see you, but for goodness sakes, be quiet!

If you must clap, please do so like you're attending a golf tournament, and if you must stand, please sit right back down as soon as possible!

Last night, your team needed you! Your team of 18-year-olds. Your Hall of Fame coach needed you.

The mighty 'Cats were trying to come from behind and snatch a victory from the dreaded jaws of Purple Ace defeat. They needed you, and you just sat there. On your cell phones, arms folded, looking bored and uninterested.

Only one word for Wildcat fans: embarrassing!