The Brow Lays 46 on His Former Teammates 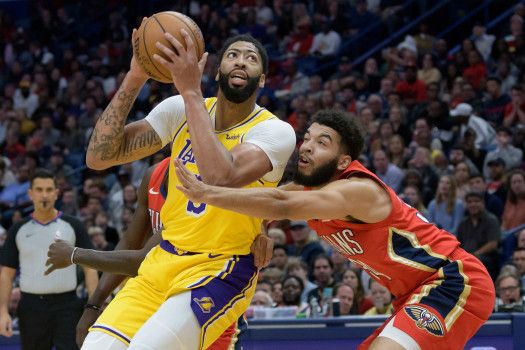 Not that Anthony Davis running rampant over the New Orleans Pelicans wasn't expected or anything.

After all, dude smacked them down to the tune of 41 points, 9 boards, 3 steals and a block in the Crescent City five weeks ago.

So when he went off on them for 46 and 13 -- letting the other Los Angeles Lakers do the rest -- all the Pels could really do was accept their fate.

That matchup might be asking a bit much a tad too early for a rook, even Zion Williamson.

Being real, New Orleans doesn't have any sorta matchup that can neutralize The Brow, and with the supporting cast he's got in LA -- starting with The Man himself -- not many teams do.

So while tonight's one-dude demolition was inevitable, it still was a sight to behold:

What's impressive is this wasn't a vendetta performance. AD got his numbers within the game's flow, and he did it in as well-rounded a manner as a player can be:

Here's something else that's become realistic:

LeBron will forever be regaled for his stats and achievements, but one that will probably receive insufficient praise is his set-up role in AD's rise to being a championship-level factor. Ironically, that's a major element in being a superstar: your presence making your teammates better.

Someone else is starting to show that trait, albeit at a lower level.

Lonzo Ball racked up 23 points and five assists in this game, easing the apprehension as to whether he's gonna be what the Pelicans were expecting when they made him their focal point in the AD trade.

Another piece of that trade, Brandon Ingram, did post a 22-point night, but it took him 27 shots to do it, and he wasn't a factor on the boards.

It's obviously gonna take the Pelicans longer to determine how they did with their return after AD forced their hand. The Lake Show, though, is getting what they thought and liking what they're seeing.

For all the buddy moves that happened last summer, it does seem like the Lakes wound up the ultimate winners.

In the short term, anyway, but after the last couple of seasons, that'll work for them, too.