The Ball Family Does WWE Raw 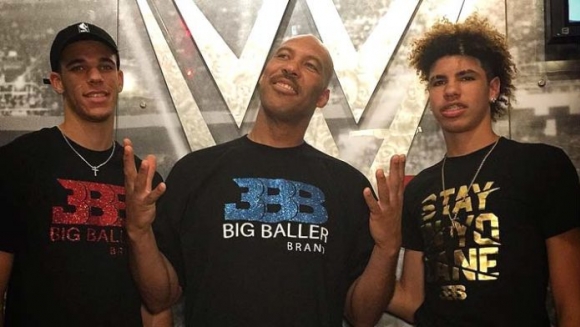 Well, this was probably inevitable.

The Ball family, led by lunatic patriarch LaVar, did a spot this past Monday on WWE Raw.

The old man seemed right at home in this environment, as every single interview he conducts is strikingly similar to a wrestling promo.

Predictably, the segment went off the rails pretty quickly.

Unless you're into this sort of thing, that clip may be difficult to absorb.

Even Vince is stunned at that footage.

For those of you lucky enough to be uninitiated, the actual wrestler in the ring was someone called The Miz, who was hosting something called -- what else? -- Miz TV.

Sadly, the family Ball were guests on this fictitious show.

Aside from the shirt removal, this was pretty much business as usual for LaVar.

His shtick will never be more appropriate than in the middle of a wrestling ring.

Of course, dude's kids enjoyed themselves, particularly young LaMelo, who was laughing heartily at his old man's antics.

Actually, the 15-year-old may have gotten a bit too excited.

Yeah, that was definitely an n-bomb or two.

Of course, it's perfectly fine when Will Ferrell -- as Robert Goulet -- does it.

Perhaps WWE should just formally apologize for the entire concept.