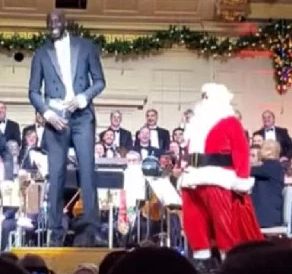 Chances are they'll retire his wand after this performance.

It's customary for the Boston Pops to feature guest conductors in select concerts every now and then, and what better time than the holidays to make what's clearly a different kinda record.

As in tallest conductor of a symphony orchestra.

It doesn't take a deep dive into the Guinness Book of World Records to know they did it. After all, dude's got inches on former record holder Shaquille O'Neal.

The Pops invited none other than 7-5 Tacko Fall to take the podium and lead their crew in a rousing rendition of Sleigh Ride.

The pride of Senegal hoops and current fan favorite at the Garden looked dapper in a tux that went on forever and showed moves anyone would dare the likes of André Rieu to make.

🎼 @tackofall99 is a man of many talents

The only thing missing was a thunderous throwdown of his conductor's wand.

At least now, it's in pristine condition to be enshrined in the Pops hall of fame. If they ever get around to building one.

Tacko's getting used to warm receptions. Celtic fans now consider him to the the maestro of garbage time:

Dude wasn't drafted outta UCF, but after a strong showing in G League camp, he attracted interest from the Celtics.

It's easy to see why. The upside is there:

Right now, Tacko's logging just under four minutes per appearance. It's a bit more modest than the way John Havlicek got his career started -- and there's no way Fall's ever gonna be a sixth man -- but hell, he's on the roster.

From there, stuff can happen.

Like maybe directing traffic on the court. If it ever gets to that, dude should give a nod to the Boston Pops for dropping him a dime.