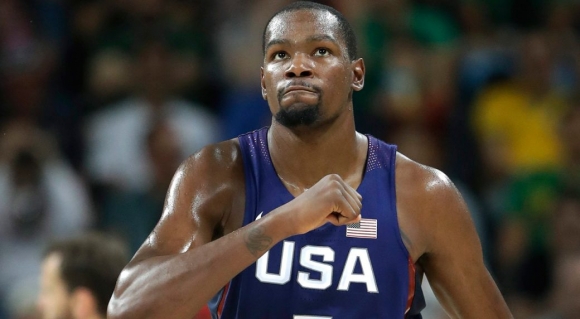 The Rio Olympics have come to an end.

Was this Olympics any more of a disaster than previous ones?

Well, unless you’re Ryan Locthe. And that's because he made a mountain of a molehill, forgetting that the media swoop in to cover mountains, so one had better be there, dammit.

One would think dudes like Al Roker would do what trained journalists are supposed to do: corroborate through two independent sources.

Back to the games, though.

With the final day of the Olympics comes the two medal games in men’s basketball.

The first match of the day saw the Boomers of Australia take on Spain. Even though this wasn’t for the gold, it was still huge for the Aussies, who were seeking their first ever medal in Olympic hoops.

Spain grabbed the initiative in the first half, but the Boomers refused to go down quietly. Specifically, it was Spurs PG Patty Mills and his 30 points along with C David Anderson, whose 15 points and 5 rebounds helped make up for Andrew Bogut fouling out early in the second half, logging a measly 15 minutes of playing time.

The game’s final minutes were some of the tournament's most dramatic as the two teams went basket-for-basket, trading the lead several times over.

In what seemed like a possible bronze medal-clinching shot, former Spur Aron Baynes hit a hook shot that gave the Boomers an 88-87 lead with 9.7 seconds remaining.

However, the following play will be something of an Olympic controversy for years to come.

After inbounding the ball, Spanish PG Sergio Rodríguez drove to the basket and got a blocking call against Patty Mills. Replay appeared to show a no-call would've been in order -- or a charge if a whistle had to be blown -- but the referee's opinion stood.

Rodríguez made both free throws, giving Spain the lead, and they rolled with it from there.

Australia bungled away a possible chance for the game winner, and Spain rejoiced in their 89-88 bronze medal clinching victory.

Suffice to say, The Boomers were a little peeved at the officiating. Andrew Bogut, especially, won't have a second career in the diplomatic corps anytime soon.

Moving on to the gold medal game, the USA was obviously a prohibitive favorite.

Chalk chasers surely jumped all over the 15 point spread. After all, this is a Mike Krzyzewski-coached squad. No one in the current game is better at making strategy adjustments, and if anyone's even close, it's Jim Boeheim and Tom Thibodeau.

They happen to be his assistants in Rio.

Thus, it was a singjlar source of amazement that, in a typical 2016 Olympic USA men's hoops performance, they got off to another slow start.

This time, all it took was choice words from the bench. The anticipated US blowout finally occured, triggered when Kevin Durant remembered that his name is Kevin Durant, and he gets buckets.

In a repeat of the 2012 gold medal game, dude dropped 30 points, half of which came via the three-ball.

Yes, that's a loop, but it's basically what happened all game.

In the end, the 96-66 score failed to show how much of a smasharoonie it really was, especially considering the last six minutes saw Harrison Barnes trying and failing to get the USA to 100 points.

This makes three straight gold medals since the 2004 disaster that sparked the return of NBA stars to the Olympic roster.

The game also had huge meaning for Carmelo Anthony, who announced he'll be retiring from Olympic competition. Dude's 7 points and 7 rebounds pushed him to the top spot for Team USA in both points and rebounds, as well as the most games played.

Now, all he's gotta do is find a way to play for Coach K in the NBA. Seems like Krzyzewski is the only one who can actually get a full performance out of him.

Not to mention everyone else. This is the last Olympic rodeo for the Duke maestro, who finishes with an undefeated record.

Don’t fret, though, basketball fans. Team USA will be in good hands with Gregg Popovich at the helm.

Among other resources available to Popovicn, LeBron James has all but confirmed he'll be playing in the 2020 Tokyo Olympics.

Japan should still be Zika-free then, so the supporting cast oughta be dynamite, too.